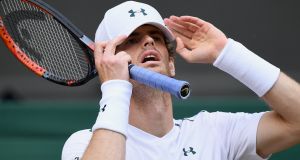 Andy Murray’s hopes of competing in Wimbledon this summer are in doubt. Photograph: PA

Fears Andy Murray could miss Wimbledon because of concerns that his recovery from hip surgery has stalled sent a shiver of dismay through the game on Tuesday night. However, a spokesperson for Queens, the grasscourt tournament that starts on June 18th, two weeks before Wimbledon, said their six-times champion is still on the entry list and they have had no indication he plans to pull out.

“Wimbledon is such a long way off,” a source close to the Fever-Tree championships at the Queens Club in west London said, “nearly two months, in fact, it seems premature to be writing him off.

“We certainly have had no news to that effect. He is still on our entry list [posted on Tuesday], which is the strongest in the history of the tournament, with six of the world’s top 10 and 17 of the top 30 featured, along with former champions and finalists.”

He added: “It could happen, but there has been no word from his camp. We expect to be working with him in promoting the event at some point in the coming weeks.”

Reports in several newspapers and on the BBC varied in their level of gloom over Murray’s prospects of being ready to return after having an operation on his hip in Melbourne in January. One suggested that he was “highly unlikely” to play in the new Challenger event in Loughborough, which starts on Saturday week – although he has never said publicly he would play there in support of the LTA’s initiative.

Another said there was “little prospect” of his fulfilling any of his grass-court commitments – including the one tournament he has definitely earmarked for his comeback: the newly branded Libéma Open in Rosmalen in the Netherlands, the week after the French Open.

The core reason for speculation is Murray has not been sighted lately around Wimbledon, where he often trains before the championships or in periods when he is recuperating. While that might seem a slim premise to imagine he will miss the entire summer and delay his return until next year, there will always be concern about his fitness until he steps back on to court in a competitive Tour match.

As it stands, those worries should be tempered with mild optimism. For months, his camp have sent out positive vibes about his rehabilitation, occasionally hinting at “peaks and troughs”. Certainly he will heed the counsel of friends such as Rafael Nadal, who spoke to him in April and advised caution.

While Murray misses the game so badly he will lean towards playing again rather than extending his absence, if he does not play at Wimbledon – which starts on July 2nd – it would indeed be a downbeat scenario for him and for tennis. Murray turns 31 next week. Time is the one ingredient he cannot inject into his career.