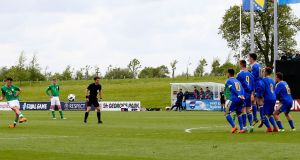 With plenty to spare, the Republic of Ireland blazed into the quarter-finals of the Uefa Under-17 European Championships on Friday afternoon by seeing off Bosnia-Herzegovina at St George’s Park.

Ireland were on their way to the draw required to seal a top-two finish from Group C when Troy Parrott buried a sublime free-kick with 11 minutes remaining. Adam Idah underlined supremacy by bagging a second in stoppage time, ensuring they set up Monday’s last-eight tie against the Netherlands in Chesterfield (kick-off 7.0pm), impressive winners of Group D at the 16-nation showpiece.

Speaking afterwards, jubilant Ireland Colin O’Brien felt his side were full value for their victory.

“The boys recovered from defat to Belgium by deservedly beating Denmark and now Bosnia.

“We could have scored earlier but Troy and Adam got the goals later and we start preparing for the challenge against a talented Dutch side straight away.”

Ireland should have been out of sight by the break. Top scorer Adam Idah missed two sitters inside the opening 10 minutes, firstly hesitating when clean through to allow goalkeeper Luca Kacavenda advance to smother and then smashed a shot over from a wide angle. Captain Nathan Collins had the ball in the net also only for his header to be ruled out for offside.

Down the other end, Bosnia were struggling to go about engineering the required victory. Still, Ireland goalkeeper Jimmy Corcoran had to be alert to bat away Malik Memiševic’s shot.

Ireland remained dominant after the break, with Jason Knight arrowing a shot across goal and beyond the far post two minutes into the second half and Idah forcing Kacavenda to go full stretch with another attempt.

While the patter was maintained, with Idah lobbing an effort off the crossbar and Parrott stinging the palms of Luca Kasavenda in goal, Ireland were almost unhinged.

Kristijan Stanic was allowed drift in from the left unmarked and fortunately for Ireland, his he curled past the far post with goalkeeper Jimmy Corcoran well beaten.

Just as the game was heading up the draw, up popped Parrott for another superb cameo. When Ireland substitute Max Murphy was fouled 20 yards out, the Tottenham forward dinked his free-kick over the wall and into the top corner.

The 16-year-old was involved in the second goal, freeing Idah who brushed off his marker before stroking the ball home from 10 yards.

Monday’s quarter-final will be shown live on RTÉ2 and RTÉ Player (kick-off tbc).