Ken Early: Is Gerrard at Rangers a no-brainer or just brainless? 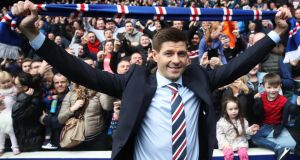 Steven Gerrard at Ibrox: Rangers fans are ecstatic that someone with his profile is joining them when other, perhaps better-informed managers have turned them down. Photograph: Ian MacNicol/Getty

“I think it’s a no-brainer for him” was Alan Shearer’s verdict when he was asked last week if it would be a good idea for Steven Gerrard to become the next Rangers manager.

A few days later, sitting in a wood-panelled room at Ibrox in a dark suit and blue-white-and-red club tie, the next Rangers manager echoed Shearer’s words. “When the call came to speak to Rangers it was a no-brainer,” Gerrard said. “It was a different feeling in my stomach from other opportunities I have had to be a manager.”

It was a lucky break for Rangers that Gerrard makes big career decisions with his stomach rather than his brain, because a dispassionate, logical analysis of what they were offering would conclude that it was quite possibly the worst opportunity in soccer.

Conventional wisdom would suggest that the best management opportunities are those that come up when a big club is at a low ebb. This was part of the logic that convinced Jürgen Klopp to succeed Brendan Rodgers at Liverpool.

In his first press conference as Liverpool manager Klopp said he was looking forward to coming into “a situation that’s not so difficult as all the people in this room feel, I think”.

The consensus was that Liverpool did not have the finances to compete with Europe’s elite clubs. Klopp’s answer was that people needed to “stop thinking about money” and turn from “doubters to believers”.

But Rangers is different from Liverpool in two important ways.

First, Liverpool did not have as much money as the Manchester clubs or Chelsea, but they had enough: not enough to sign the biggest stars in the game but enough to prise outstanding players from other Premier League clubs, enough to attract rising stars from abroad, enough to put together and maintain a competitive team.

Second, Liverpool fans haven’t expected to win the title since the late 1990s. Five years before Klopp took over the club had been on the verge of bankruptcy, with Roy Hodgson as manager. So their mood was just what a new manager would wish for: high on hope, low on expectation.

As for Rangers, it’s a matter of some uncertainty just how much money they will be able to put at Gerrard’s disposal; the one thing we know is that it won’t be enough. They face an almost impossible task to compete financially with their only meaningful rivals, Celtic. Rangers pay their players an average of £320,000, or about €360,000, a year, which is about the average pay in England’s Championship, and less than half of what players can expect to earn at Celtic.

But overcoming this imbalance is not the hardest part of the job. The really difficult part of managing Rangers is that Rangers fans still expect to get the better of Celtic even though all the numbers say they can’t. Barring some miraculous financial transformation their situation is essentially hopeless, yet the expectation remains as high as ever.

And these are not the sort of fans to accept that the manager is doing the best he can with limited resources, and what he really needs is for people to lay off and give him space and time to work.

One afternoon in November 2014 I sat in the Copland Stand at Ibrox watching Rangers draw 1-1 with Alloa in the Scottish Championship. The late Alloa equaliser ignited an explosion of rage in the stands, most of it directed at Rangers’ boss at the time, Ally McCoist.

McCoist was a playing legend at Rangers, and he had further burnished his image with the fans by staying loyal when they were demoted to the third division after the tax scandal that engulfed the club in 2012. None of this mattered any more; the fans wanted him gone, and he would leave the club the following month.

Gerrard will soon become the seventh person to take charge of Rangers in the 3½ years since then. In managerial terms this has been the most volatile period in Rangers’ history. Reduced circumstances have not led to any reduction in pressure.

And then there is the peculiarly toxic nature of the Old Firm rivalry to contend with. Many people say the heyday of sectarianism is in the past, but the fans waiting outside Ibrox to see Gerrard were still singing about being up to their knees in Fenian blood.

This sort of thing explains why the Celtic fans’ delight in Rangers’ ongoing humiliations has the freshness of eternal youth. In a lot of countries the supporters of the team that had won seven league titles in a row might be getting bored by now. Not so in Scotland. When Rangers were still in the Championship I asked a Celtic legend if he didn’t on some level want Rangers to recover, to make the league competitive again. He laughed and said he would be quite happy if Rangers stayed in the lower leagues forever.

While Celtic fans invent new ways to laugh at Rangers, Rangers fans have become angrier and more paranoid. Gerrard’s appointment has brought temporary relief: right now they are ecstatic that someone with his profile is joining them, when other managers, such as Aberdeen’s Derek McInnes – less famous than Gerrard but perhaps better-informed about Rangers – have turned them down.

That euphoria will soon evaporate when Rangers fall behind Celtic in next season’s title race. That’s when Gerrard will discover the real meaning of pressure. He argues that he has lived with pressure all his life. But the pressure Gerrard is used to is the pressure of being the best player at the club, the pressure of being the match-winner. And even when he failed he knew he could count on a basic level of respect, because nobody ever doubted his ability as a footballer.

It will be different at Rangers, because there is as yet no reason why anybody should believe in his ability as a manager. Being the man responsible for a failing Rangers team would be a lonelier and more agonising kind of pressure than he had faced before. Nobody can accuse Gerrard of lacking bravery. It remains to be seen whether he’s got judgment to match.