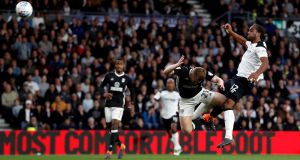 The side who finished sixth in the Championship have not won promotion through the play-offs since Blackpool managed it in 2010. Derby County have spent the intervening years finding new and more elaborate ways not to go up, but they took a big step towards the final with a 1-0 win over Fulham in the first leg of their semi.

It was a solid performance from Derby, defending Cameron Jerome’s first-half header as if the very future of the club depended on it. They played the second half as if they were the away team, defending superbly as Fulham tried again and again to break their resolve, to no avail.

The game started in that usual frantic, uncoordinated mess these play-offs tend to, perhaps aided by the nightmarishly loud pre-match music. Both teams tried to start on the front foot, which is always a recipe for entertaining chaos, Fulham threatening down either flank while Matej Vydra and Tom Lawrence buzzed around Jerome up front for Derby.

Fulham’s initial attacks were a little more cohesive, shifting the ball smartly through the playmaker Tom Cairney, trying to surgically pick holes in the Derby backline. They did not have much joy, a couple of fairly weak efforts the best they could manage.

Derby showed little of the same intricacy and frustration was beginning to grow in the stands and on the touchline, where Gary Rowett had been bouncing around in irritation. And yet, their more simple approach was brilliantly rewarded in the 34th minute.

Tom Huddlestone spread the ball to Craig Forsyth, venturing forwards from his position in the back three, who pinged over a superb cross from deep on the left, right onto the head of Jerome who powered his effort into the net. It was not right in the corner, but Marcus Bettinelli barely smelt it as the ball flew past him.

Before the run-in Jerome had scored only once since joining Derby in January: that was his fifth in the last four games. When he signed it seemed like a curious move: now it looks inspired.

Derby’s performance was superb in its discipline, if nothing else. They defended in rigid shape, allowing Fulham to pass as much as they liked until they got within range of goal, and then any threat was smothered.

The Fulham of the first half looked more like the side of the past few weeks, when they’ve seemed tired and a little tense: it was beginning to look like that extraordinary run, 23 games unbeaten that nearly won them automatic promotion, had both come a tiny bit too early and had sapped their energy. You could tell the travelling fans were getting nervous: at the start of the second half they started booing a ballboy, for reasons slightly unclear.

But after the break their team showed much more purpose: Kevin McDonald belted a shot against the bar, then Floyd Ayite volleyed over from a terrific long pass by Matt Targett. Aleksandar Mitrovic, so often Fulham’s brutal inspiration in the latter months of the season, struggled to find space to do much damage, and began dropping deeper as he searched for the ball.

Derby were keeping their shape, but defending deeper and deeper, relying on counterattacks and inviting pressure. Cairney took that invitation and smacked a shot from outside the area which Scott Carson – probably the best goalkeeper outside the top flight – pawed away.

Rowett, perhaps because his team were being penned back, introduced a little more mobility in the shape of David Nugent and Ikechi Anya, and the latter almost got a second moments after coming on, just failing to get a touch on a low cross from Lawrence. Denis Odoi saved an almost certain goal from a similar Lawrence cross, and briefly Derby grasped the game again.

Ryan Sessegnon was taken off with 15 minutes to go, his anonymous performance suggesting two things: that Andre Wisdom had done a fine job in neutralising him, and also that a rumoured call-up to the senior England squad is too soon for a player who does not turn 18 for a week.

On the touchline, as Fulham attack after Fulham attack was snuffed out, Slavisa Jokanovic, in that brooding manner of his, cast his eyes towards the floor like a parent who wasn’t angry, just disappointed. If this often thrilling Fulham side don’t go up this season, it will be a shame, but in truth in this game they deserved no more.