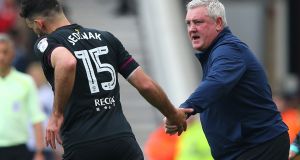 Mile Jedinak headed Aston Villa a step closer to the Premier League as they beat Middlesbrough 1-0 in the first leg of the Sky Bet Championship play-off semi-final.

The Australian’s deft 15th-minute finish handed the visitors a crucial lead to take into Tuesday night’s return fixture at Villa Park, and Robert Snodgrass would have added a second on the stroke of half-time but for a fine fingertip save from Irish goalkeeper Darren Randolph.

Boro fought to the bitter end for an equaliser in front of a passionate crowd of 29,233 at the Riverside Stadium, but were largely unable to summon up the craft they needed, despite goalkeeper Sam Johnstone’s late save from substitute Fabio.

The game began at a frantic pace, with Villa working desperately hard in an attempt to deny dangerman Adama Traore the time and space he needed to prosper, and Snodgrass and Jack Grealish looking to carve open the home defence.

Mo Besic sent a dipping 11th-minute shot just over Johnstone’s crossbar, but the opening goal arrived at the other end four minutes later when Jedinak lost marker Ryan Shotton to glance Grealish’s corner home off the inside of the far post.

Boro responded belatedly with Britt Assombalonga firing wastefully wide after controlling Jonny Howson’s long ball on his chest and then blasting another effort into the side-netting soon after.

The striker was unfortunate to see his instinctive header from Traore’s 37th-minute cross fly straight at Johnstone with the Teessiders upping their tempo, but Randolph kept his side in it when he tipped Snodgrass’ curling shot on to the post seconds before the break.

Boro returned in determined mood, but lacked inspiration as Villa defended deep, but with a measure of comfort, and attempted to hit the hosts on the counter.

Manager Tony Pulis was forced to make a change with 64 minutes gone when central defender Daniel Ayala limped off to be replaced by Fabio, and the newcomer almost made an instant impact when he ran on to Besic’s intelligent pass, only to deliver his cross behind the red shirts arriving in the middle.

Ben Gibson nudged a 77th-minute Stewart Downing corner into Johnstone’s waiting arms, but the keeper had to react smartly to repel Fabio’s effort at his near post and was grateful for substitute Birkir Bjarnason’s block from the Brazilian’s last-gasp attempt.