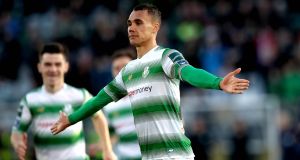 Republic of Ireland manager Martin O’Neill says that the game against Celtic in Glasgow on Sunday week is a “big opportunity” for the likes of Shamrock Rovers midfielder Graham Burke and Preston striker Callum Robinson, both of whom are included in the senior international squad for the first time.

Overall there are 40 players named in an extended squad for the three games – in Scotland and then against France and the USA back in Dublin – with Peterborough goalkeeper Conor O’Malley and Millwall midfielder Shaun Williams the other players to be called up for the first time.

Preston forward Robinson is likely to feature in the Celtic game but then depart the squad as the paperwork required for his international transfer has not been completed and he is not yet eligible to feature in games against France or the USA. It is not yet clear how long Burke will be involved, though, with his position complicated by Shamrock Rovers still being very much in season and having a game in Sligo the night before the one at Parkhead.

Beyond that, in any case, more established players are likely to displace more peripheral ones as they come in over the following two weeks. Still, O’Neill is adamant that that pair can both make an impression

“It’s very important if some players get the opportunity, then they should grab it ahead of the matches coming up in September and October,” said O’Neill, whose squad announcement was held at the Spar Primary Schools 5s Leinster finals in Navan.

“I think it’s a step up. I think players playing in the Championship, never mind anything else, find it difficult to play international football – particularly qualification games.

“It’s very important to feel that, whatever game you played the previous Saturday, it won’t properly compare to the tension, to the ability other players might possess and how you counteract that.

“In my early days at Nottingham Forest, going into international matches I found that really difficult. The year that Forest won the championship, we were flying and playing in European football for the next couple of years.

“I can’t say the international matches became easy, but they came easier to me in that sense. I was a bit more mature and a bit older, so I was able to deal with it. I think that’s what these young lads might be going through now but I feel it’s something that they should take, really embrace and go for it.”

Burke, he said, has caught his eye over the course of the season, most recently in the game against Cork City which O’Neill attended, and he is looking forward to having a closer look at him. The midfielder scored his side’s first goal in the win, a spectacular strike from 25 yards, but the manager says that it is as much his general play that has earned him the call up.

“I think he did really fine in the game,” he says. “He has nice ability. Sometimes when you’re looking at a game and someone is standing out in a particular match, then in your mind you think ‘Is he capable of doing that?’ let’s say, for instance, in the Premier League.

“He has come back from Villa; that might be for a number of reasons. It might be homesickness, maybe he didn’t get the proper break – I really don’t know. But it looks like he’s showing that ability again, and who knows what might happen in the future.

“I have, during my time, put some players into the squad that have made a peripheral squad and then dropped out. But if he gets the chance, then go take it. That would be my advice to him on the field of play here in this match. ‘Go and play your game.’”

Robinson, he said, meanwhile, “will be involved in the Celtic game. It hasn’t come through yet but I have spoken to him and he is delighted to be in it.”