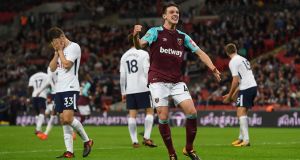 Declan Rice has been a regular at West Ham this season. Photograph: Stu Forster/Getty Images

He will have an eye, of course, on play-offs that might yet increase the number of eligible players at clubs competing in the top two divisions but as Martin O’Neill prepares to name his squad on Thursday for the end of season friendlies he might well reflect that the last nine months could have gone better for him.

Things are, famously, afoot here in Ireland that are intended to provide a better pathway to a high level professional career but the tiny numbers making it to the top as the situation stands is underlined by the statistics for the Premier League season set to end at the weekend.

Just 18 players who were born in or have declared for the Republic of Ireland have kicked a ball in the top flight since last summer. Of those, five (Jon Walters, Damien Delaney, Stephen Ireland, Josh Cullen and Michael Obafemi) barely featured at all; three (Rob Elliot, Harry Arter and Ciaran Clark) lost places and two (Robbie Brady and James McCarthy) had their seasons ended early by serious injuries.

There is some overlap in the lists (Walters has been struggled to be fit all season and McCarthy had only played a handful of games before he got hurt) but things are rarely straightforward in these things and the bottom line is that just eight of the players featured for their clubs last weekend compared to, say, 14, in the very first round of Premier League games in August 1992.

Back then there was quite a spread with Irish representation at the club that would win the title (Denis Irwin at Manchester United) and plenty at the one that ran them close but also in all three sides that went down. Now, Burnley, in seventh, is the highest club to contain Irish players who have seen action.

Of all of them, Declan Rice looks to be the campaign’s undisputed individual success story. Having been handed his opportunity at West Ham while still in his teens he has seized it and playing a fair bit of football through some tough times in a side that ultimately stayed up should stand to him immensely.

Collectively, the boys at Burnley must be pleased with themselves too. Walters has struggled with injuries since arriving last summer from Stoke and Brady has been out since early December with the Dubliner picking up a bad knee injury a half an hour into the defeat at Leicester. He had seemed to be hitting a bit of form at the time and had scored his first league goal of the campaign just a few days previously.

In his absence, though, Stephen Ward, Jeff Hendrick and Kevin Long all played a big part in helping the club to a spot in the Europa League and those stats a few weeks back showing that the team average four times as many points per game (just over two versus 0.5) when Ward featured were ones of the unexpected and slightly offbeat joys of the season.

The Dubliner has at least another year to go with the club and however heavily or otherwise we should rely on the numbers, he has done well enough to be considered important as they head into a campaign next season that will test a club with such a limited squad. Long and Hendrick have both progressed, significantly, meanwhile, although there remains the enduring sense that the latter still has the potential to make a much bigger at this level.

Seamus Coleman’s return from injury was hugely positive development and amid all the managerial uncertainty at Everton he will be pleased just to have come through (barring a mishap this weekend) the tail-end of the season without any further problems so as to be able to focus on getting back to his very best next season.

Elliot, though, and Arter may have to move over the summer. It is unclear whether the Bournemouth midfielder was unsettled by talk of a transfer to West Ham back in January - his current club denied there had been an actual offer at the time - but it certainly seems that his current salary might make him favourably disposed to offers. He has not, in any case, featured since the middle of that month and though there may have been the odd injury problem, he has made the bench a fair few times.

At this stage, Elliot, it seems, cannot even manage that. The 32 year-old has had more than his share of misfortune over the past few years and must have been thrilled to start the season as Newcastle’s first choice goalkeeper. A thigh injury cost him his place for the game against Brighton just after Christmas, though, and he has not played since, with the Ireland international slipping from second to third choice, it would appear, somewhere along the way.

He wasn’t helped by his replacement keeping back to back clean sheets when he had managed three in 16 games up until then (Clark, somewhat similarly, watched the team’s best spell of the season - four straight wins, from the bench) but he can’t have been cheered up much to see that a save he made in his final appearance - the 1-0 defeat by Manchester City on December 27th - was reckoned worthy by the BBC of short-listing for their best stop of the season.

O’Neill, of course, will feel some relief that Shane Long’s Southampton are safe in the wake on Tuesday win at Swansea but it would surely matter more if the striker could recover anything approaching his best form. Given the scale of his wages and length of time remaining on his deal, Mark Hughes may have little option but to try to coax more out of him next season and perhaps he is the man to do it.

West Brom, though, are gone as a result of Southampton having saved themselves and James McClean will do well to escape a spell in the Championship with them. Clearly there are those who bear much more of the responsibility for a solid club’s slide this year but one goal and, the stats sites suggest, no assists at all, will not have him at the top of too many rivals’ lists.

At the two promoted clubs, Matt Doherty of Wolves is the main player of interest to O’Neill and regular top flight football, assuming he gets it, should made the full-back a serious option for the Ireland manager. Of the play-off sides, Aston Villa look the best bet from his perspective with Conor Hourihane and Scott Hogan looking like players who need to be similarly tested although clearly each of the other three clubs has the potential to provide some consolation.

With precious few contenders (Obafemi, maybe, and Liverpool’s Conor Masterson or Jayson Molumby and Aaron Connolly at Brighton) to make a breakthrough next season and absolutely no guarantees, the challenge seems likely to be greater than ever next season. And while work continues on developing the next generation, the prospect of a call up for Callum Robinson this week will underline the ongoing importance of genealogists to the Irish game.