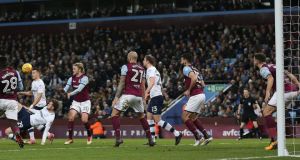 Tom Barkhuizen, North End’s leading marksman, put the playoff chasing Lilywhites ahead in the first half.

But Villa equalised as a result of a controversial penalty converted by on-loan Bournemouth striker Grabban in the 66th minute.

A struggling Villa, who had been looking to complete the double, therefore missed the chance to move into second place in the table.

Burton condemned Jose Morais to defeat in his first game in charge of Barnsley with a 2-1 victory which moved Albion off the bottom of the table.

The Portuguese, appointed as Paul Heckingbottom’s successor last week, suffered a dismal start to life at Oakwell as Jamie Allen’s screamer put the visitors 1-0 ahead inside a minute.

Jacob Davenport doubled Burton’s advantage with a free-kick on the stroke of half-time and they held on despite Daniel Pinillos’s 75th-minute goal.

Burton leapfrogged Sunderland and Barnsley but remain in the bottom three, below Hull only on goal difference.

Sunderland dropped to the foot of the table after losing 1-0 at fellow strugglers Bolton.

On-loan Nottingham Forest forward Zach Clough scored the winner in the first half to take Wanderers four points above the drop zone, level with Reading.

Birmingham are one point from safety following a 5-0 defeat away to playoff chasing Brentford.

Ollie Watkins scored in each half while Florian Jozefzoon and Neal Maupay also struck before Marc Roberts’s own goal.

Like Preston, Boro are two points behind Bristol City after a convincing 3-1 victory over Hull at the Riverside.

Rudy Gestede scored twice and Patrick Bamford also netted to down Hull, who had equalised shortly before half-time through Evandro Goebel.

Sheffield United are just one point adrift of Lee Johnson’s side after beating QPR 2-1 at Bramall Lane.

Richard Stearman and John Lundstram put the Blades in control before Luke Freeman made the final half an hour uncomfortable.

Millwall made it 11 games unbeaten at home in all competitions with a 2-1 victory over Sheffield Wednesday.

Losing to Josey Pulupessy’s 42nd-minute opener, the Lions responded through Lee Gregory and Steve Morison and held on in the 13 minutes of stoppage time.