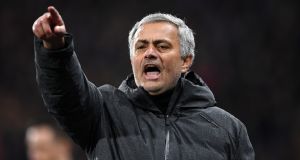 The cameras were out late at Carrington on Tuesday morning and so was Paul Pogba, which was one way of announcing that the Frenchman should be fit to play in Seville.

But José Mourinho said it was “unfair” to load him with the responsibility for carrying Manchester United to the phase of the competition where teams start to believe they can actually win it and stopped short of saying he would start. Instead, he had set up a response before he and his players flew to Spain, one that he did not clarify upon arrival in Andalucia.

Normally the media is allowed in to film the first 15 minutes of training before Champions League ties – meaningless minutes in which the only thing anyone sees is players jogging round the pitch, stretching or knocking the ball back and forth with little real purpose – but this time access was granted towards the end of the session.

And that, Mourinho said, provided an objective view of the condition of his players, including Pogba who he had been frustrated not to be able to field against Huddersfield. What Mourinho did not provide was a definitive answer when he was asked if the midfielder would start.

“Normally when we open [training sessions], we do it in the warm-up and the simple drills,” Mourinho said. “[But] this time we did it for a long time so that we could see the players in a competitive situation – and when a player is in that situation it is because they are normally ready and without any problems. You could see that in training.”

The answer was a rambling one, far from clear and without a definitive “yes, he is fit” or “no, he is not fit”, and there was no opportunity for Mourinho to clarify what he meant.

He may not have wanted there to be one, either, while how far the morning session had been staged may have been a legitimate question too. There would be no holding back despite facing Chelsea on Sunday, Mourinho said, and no obligation to play Pogba. When Mourinho was asked if this was the kind of stage that his most expensive signing should dominate, he sought to release the pressure on the man who cost €100 million.

“I don’t think it is fair to speak about the responsibilities of a player,” Mourinho said. “I don’t like the fact that the player who cost X millions doesn’t have the same responsibility as the player who cost three times X. I think it is for everyone. I understand that, from your point of you, but I don’t like that approach. When I decide the team to play I don’t look at the age, the salary, [or] the transfer fee, because I think that is not fair.”

On an evening when there was a hint of nostalgia as Mourinho returned to Spain to face a coach who is embarking on only his second Champions League night and who admitted to feeling “enormously emotional” at being able to compete against a man he has read about in books, much of the focus was on what this competition means and how it can be won.

This will be Mourinho’s 140th Champions League match and he has won more titles than Vincenzo Montella has managed games.

When it was pointed out to him that he had won many titles in Spain, Mourinho smiled, held up three fingers and said: “no, not many”, and he insisted that there would be no repeat of the 6-2 scoreline he twice achieved here with Real Madrid, but he has an admirer in the Sevilla coach.

“He is a pioneer in training methodology, he was different,” Montella said. “I have read his books and what has been written about him, I’ve read a lot about tactical periodisation.”

Montella said United were favourites, and had warm words for Mourinho, Pogba and also Alexis Sánchez – a “fantastic” player who he said could be stopped only by “tying him down with rope”.

If this is a stage for Pogba it is also one that Sánchez wished to return to, but for it to have been worthwhile United must reach the quarter-finals – where, Mourinho said, even the less favoured teams, “which includes us”, believe that anything can happen and they can win the competition.

“Alexis could have come in the summer, to us or another club, but one of the reasons he came now was the attraction of playing the Champions League,” Mourinho said.