All in the Game: Salah’s genius converting people to Islam

Meanwhile, you can rent a room at the Allianz Arena, quotes of the week and more 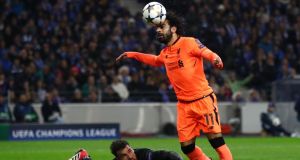 Before they inevitably sell him to Barcelona, Liverpool fans are loving life with Mo Salah, the fella having a decent debut season with the club. So wondrously decent, he’s inspired a bunch of tunes in his honour. There was, of course, that offering from Cork’s own Richy Sheehy, set to ‘Sugar, Sugar’, that nobody could extricate from their heads after hearing it. And there was the one to the tune of ‘Sit Down’:

That was catchy. But the newest one tops them all. Dodgy’s ‘Good Enough’ is the air, and the words go like this:

If he scores another few then I’ll be Muslim too.

then sitting in a mosque is where I wanna be.”

The Mosques of Merseyside will be crammed.

A room with a (decent) view

Competition of the Week: That would be the one being run by Bayern Munich and their new hotel ‘partner’ Marriott International, the prize VIP match-day hospitality for the German champions’ game against Borussia Dortmund on March 31st at the Allianz Arena.

Not only will the winner have the use of a custom-built Marriott executive box that features a full bar with cocktails and ‘fine dining’, they will be able to watch the game from ….. bed. Yes, the box has a bed that looks out on to the pitch through a very large window. Whether or not the 75,000 people in the arena can look through the very large window and see you in your bed is not made clear. Or hear you snoring if you drop off.

All you have to do to win the prize offered by Bayern and their hotel partner Marriott on the Time Out website is answer this question: Who is the official hotel partner of FC Bayern Munchen? You are given three options: (1) Moxy, (2) Marriott and (3) Renaissance. It’s a toughie, think carefully.

Word of mouth: Love and vultures

“We are taking it easy on Cutrone. He must not get distracted by the fact that he is the youngest player in Milan’s history to score that many goals. He has to work and to rest. I hope he finds a beautiful girlfriend so he can rest and make love.” – AC Milan manager Gennaro Gattuso, as only an Italian manager could, advises Patrick Cutrone on how to chill between games.

“I’ve always thought with Ashley Young in your back four, you are going to struggle.” – Roy Keane salutes the, eh, Manchester United ace.

“This is obviously not ideal.” – West Brom boss Alan Pardew on Jonny Evans, Gareth Barry, Jake Livermore and Boaz Myhill breaking a midnight curfew and stealing a taxi at around five in the morning in Barcelona during, well, a training trip. Ideal it was not.

“It looks like that movie Police Academy. Police Academy 1, Police Academy 2 and we think we’re going to Police Academy 3 in this moment because it’s the third time.” – Swansea City manager Carlos Carvalhal after his side’s 0-0 draw with Sheffield Wednesday in the FA Cup, leaving them facing their third replay in as many rounds.

“In a war there are those who feed off victories and there are those who, like vultures, feed from the carrion of the defeated. They do nothing, they produce nothing, they live off the limelight or, more often, off the struggles of their ‘prey’.” – Neymar’s Da (and agent), just a touch unhappy with criticism of his lad’s performance against Real Madrid.

“It’s only when you leave Juventus that you realise what you had. I miss it like crazy and would love to return ... I have Juventus in my heart…. to the Bianconeri fans I’d say I’ll be in another shirt, but I love you and I can’t wait to see you.” – Fernando Llorente ahead of returning to Turin with Spurs for the Champions League game against his former club. He promised not to celebrate if he scored, but in the end he didn’t even make the Spurs bench, Mauricio Pochettino possibly fearing he’d put a hat-trick in the wrong end.

“Your effort + your extra work + your goals + your assists + your best moment = bench. But the ones who do not understand football are women?” – Jorgelina Cardoso, a highly peeved Paris Saint-Germain fan after manager Unai Emery dropped Angel Di Maria for the game against Real Madrid. That’d be Angel her hubby.

2,290,276: That’s how many million pounds Gordon Taylor, chief executive of the English Professional Footballers’ Association, earned last year, not counting another £50,000 plus in sundry allowances. (Meanwhile, over five years the PFA have contributed £100,000 to concussion and head injury research).

Fat chance of being mistaken for Kane

You might have seen the quotes from Liam Brady last week about why Arsenal released Harry Kane from their youth academy when he was a nipper. A bit like Decca rejecting The Beatles. “He was a bit chubby and not very athletic,” he said, “but we made a mistake.”

Funnily enough, there’s a bin man from Middlesbrough on Twitter who calls himself ‘Chubby Harry Kane’. Why? Well, as he tweeted to the player himself, “if I had a £1 for every time someone said ‘you look like a chubby Harry Kane’, I would be as rich as you pal”.

How convinced were people by the ‘likeness’? Not hugely. A person by the name of Plinkety Plink was especially unkind:

No escape from Wenger

You know how ‘Wenger Out’ signs have been popping up in the most unlikely of places over the last year or so, from demonstrations in Zimbabwe against Robert Mugabe, to a Coldplay concert in Singapore, to a lacrosse game in Kentucky? The campaign to have poor Arsene ousted has been globally relentless.

He might, then, have tuned in to the Winter Olympics to get a break from it all. Only to see the caption on the screen, spotted by half of Twitter, when a Swiss speed skater was eliminated in the 1500m event. Yes, ‘(Livio) Wenger Out’. There’s no escaping it.

2011: Tony Cascarino had to apologise for saying Armand Traore had a “holocaust” of a game for Arsenal against Manchester United.

2012: Brian Laws had to apologise for saying his Scunthorpe United side’s defending against Doncaster Rovers was “as bad as the holocaust”.

By now you’d think everyone would have learnt a lesson: avoid using the holocaust word in a footballing context.

2018: Former Hull City manager Phil Brown apologises for saying Chelsea’s Tiemoue Bakayoko had “a holocaust of a game” against Watford.

“I am genuinely sorry for the hurt and distress I caused by what I said on Talksport last week. It was wrong, offensive and completely unacceptable. I am especially sorry for the significant offense I caused to every member of the Jewish community. I can’t believe I used that word. I am profoundly and wholeheartedly sorry.”

1 Gordon D’Arcy: Change was advisable before Twickenham; now it is inescapable
2 Cheltenham keeping a watching brief on coronavirus
3 Seán Moran: Dublin and Galway make good starts in differing circumstances
4 Gerry Thornley: Wild reactions to this Ireland team as fickle as the wind
5 Munster were fever-tested when they arrived in Italy
Real news has value SUBSCRIBE
Crossword Get access to over 6,000 interactive crosswords