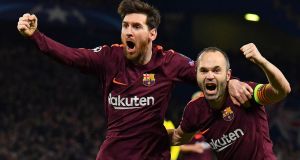 In the end, it turned out to be a harsh reminder for Chelsea about the realities of the Champions League. They had taken the lead, playing with discipline and ambition and it was shaping up to be one of those occasions when, frankly, it felt ludicrous that Antonio Conte is widely assumed to be on his way out.

But then all their hard word was undone and, for Andreas Christensen, the night was to become a personal ordeal.

No side can defend as generously as Chelsea did in the 75th minute here and expect to get away with it and Christensen, one imagines, might wake in a cold sweat when he recalls the wretched pass that put his team into trouble in the moments before Lionel Messi’s equalising goal.

Chelsea looked vulnerable as soon as the ball was misplaced and within a matter of moments Andrés Iniesta had picked out Messi for the goal that means Barca will be in a position of strength for the return leg at Camp Nou on March 14th.

For Chelsea, that made it a frustrating night bearing in mind they had taken the lead with a fine goal from Willian after 62 minutes and were looking as comfortable as at any point of the match when the advantage suddenly lurched in favour of their opponents. This was certainly not the most majestic Barcelona performance witnessed on this ground but the Catalans did show, in flashes, their star quality.

More than anything, they had a little guy wearing the No 10 shirt who did not invent the art of dribbling but has certainly taken it to its highest level. One early slalom from Messi left Antonio Rüdiger in such a fix it was difficult not to feel a pang of sympathy for the Chelsea defender.

Rüdiger is not the first defender to be bamboozled that way by Messi, and nor will he be the last. Messi then proceeded to remind everyone that far too much time had been wasted in the build-up analysing his lack of goals against Chelsea. His movement, his distribution, the deftness of touch – as much as Chelsea’s fans must have wanted the ball to avoid him, they will surely realise these are moments to treasure. And Messi, true to form, had not finished with Rüdiger.

Equally, Chelsea had players of their own who looked determined to show they could still flourish in such exalted company. Eden Hazard played with enough wit and personality to unsettle the visiting defence.

Willian’s speed and movement also created plenty of issues for a Barca team wearing their maroon third kit and the Brazilian can consider himself unfortunate, to say the least, after two first-half efforts came back off the woodwork.

The first was just before the half-hour mark and thudded off Marc-André ter Stegen’s left-hand post. Ten minutes later, Willian tried again from the same distance, roughly 20 yards out, and this time his shot ricocheted off the upright on the other side. Stamford Bridge howled with anguish but these were at least positive signs for Chelsea after an edgy start in which Barca’s superiority on the ball was considerable.

The team that is currently seven points clear at the top of La Liga played every single pass during that opening 20 minutes other than the killer one. By half-time, the pass count was 466-160 in favour of the visitors.

Yet there was another statistic at the interval that told us they had not managed a single effort on target and, for all their sophistication and lovely, soft-touch football their only real chance came after a quarter of an hour when Messi clipped a cross over from the left and Paulinho made a hash of the header.

Barca had arrived in London after scoring only once, courtesy of an own-goal, on their previous five Champions League excursions and it was unusual, in particular, to see Luis Suárez looking so subdued in the first half.

These are the occasions – the big nights, under the floodlights, with the Champions League anthem blaring – when Suarez loves to compete with Messi for the leading role. Yet it was only after the interval that Suárez started to show his menace, flashing one shot across the goalmouth and then deceiving Christensen in another break on the left.

Soon, however, Willian had the goal he had been threatening. Sergio Busquets and Ivan Rakitic both came out to try to block the shot but neither arrived quickly enough. Willian was 20 yards out again and loves to take aim from that range. He had seen a small gap inside the right-hand post and he picked it out beautifully.

Unfortunately for Chelsea, Christensen’s wayward pass was not the only error committed by a home player in the moments before Messi’s equaliser. The ball went from one side of the pitch to the other, right in front of the Chelsea penalty area.

Cesar Azpilicueta, the Chelsea captain on the night, slid in to try to avert the danger but missed the ball and that left Iniesta free. Messi, as always, was in support and was never going to let Chelsea off the hook. – Guardian service

1 Tipping Point: Eddie Jones’s rhetoric is out of place in a febrile political climate
2 Ireland backrow of O’Mahony, Van der Flier and Stander to be retained against England
3 On healing and wild hurling: The re-education of Diarmuid Lyng
4 Harry Gregg: a reluctant hero and a revered shot stopper
5 Hero of the Munich air disaster Harry Gregg dies aged 87
Real news has value SUBSCRIBE