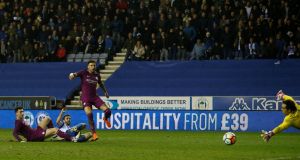 There is a famous song here about the man who has just scorched Manchester City’s hopes of a quadruple. And in the closing moments here it’s doubtful Will Grigg’s on fire has ever reverberated around this stadium with greater noise. City were on their way out of the FA Cup and, once again, it was Wigan – little, patronised Wigan – who had left the most expensively assembled group of players in English football history in a state of disrepair.

They will talk about Grigg firing in his dramatic, 79th-minute goal with almost as much fondness in Wigan as that never-forgotten moment when Ben Watson’s header against the same opponents in the 2013 final gave Wigan the greatest victory of their entire history.

The Northern Ireland international is now the leading scorer in the competition this season, with seven goals, and Paul Cook’s League One side can look forward to a quarter-final at home to Southampton while Pep Guardiola’s return to fighting on three fronts.

City have a 16-point lead at the top of the Premier League and are virtually guaranteed a place in the Champions League quarter-finals, with the Carabao Cup final against Arsenal to follow on Sunday. Yet this was a wretched night for City, who paid a heavy price for Fabian Delph’s red card late in the first half, and by the end Guardiola was looking almost as frazzled as Roberto Mancini had at Wembley five years ago.

Yet their task here became considerably more difficult after that moment, shortly before the interval, when Delph flew into a challenge on Max Power and was subsequently informed that was going to be his last contribution of the evening. City’s players were incensed by the decision and could conceivably have landed the club with a disciplinary charge because of the way they crowded around Anthony Taylor to remonstrate. The referee had not helped matters, however, by pulling out a yellow card and even appeared to start writing down Delph’s name before apparently changing his mind and brandishing a red.

It was a strange set of events and Delph’s team-mates were probably entitled to suspect the referee had been influenced by the reaction of the Wigan players.

Briefly, it threatened to spill over by the touchline, where Sergio Agüero became embroiled in an argument with Leam Richardson, Wigan’s assistant manager, and various others then became involved. The two managers were in the thick of it and Mikel Arteta, one of City’s coaches, was also drawn into the arguments before the half-time whistle gave Taylor a chance to restore some calm. Even then, however, the bad feeling continued into the tunnel, with Cook and Guardiola both keen to make their points among a scrum of players and backroom staff.

By that stage Wigan had already lost their most creative player, Nick Powell, to a hamstring injury but even when the teams had equal numbers City had found it difficult at times inside a ground where the advertising boards promote Uncle Joe’s mint balls and Ribble Farm fruit and vegetables.

City can always look a little more vulnerable when Claudio Bravo is in goal. Danilo, selected ahead of Kyle Walker at right back, looked particularly accident-prone and Wigan must have been encouraged by the space they had on the sporadic occasions in the first half when they did venture forward.

As for the Premier League leaders, the City fans amassed behind one of the goals could have been forgiven for wondering whether their team needed Kevin De Bruyne’s refined touches. Ilkay Gündogan is a splendid footballer but there can be no doubt that Guardiola’s team are at their most majestic when it is De Bruyne playing alongside David Silva in their central attacking midfield positions.

Guardiola’s response to losing Delph was to bring on Walker at half-time and move Danilo into the left back position. Leroy Sané was taken off and that meant City, with Raheem Sterling given the night off, operating with a reduced attack with Agüero as its spearhead and Bernardo Silva never too far away.

Cook had joked before the game that he was applying for special permission to field 14 players. As it turned out, his side had the numerical advantage through other means but there were still long periods of the second half when City hogged the ball, with Walker and Danilo playing as auxiliary wingers, and it was difficult to remember the away team were a man down.

Wigan, in short, still had to defend for their lives but the chance arrived for Grigg with a ball that caught out the City defence. Grigg still had a lot of work to do but he took his shot early and Bravo was beaten. – Guardian service