Chelsea aiming to be ‘horrible opponents’ for Barcelona again 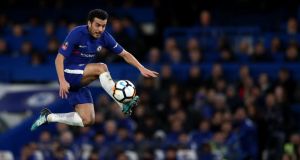 Pedro: “We can create chances . . . We can be confident. If you start with fear, that hands it to Barça.” Photograph: Catherine Ivill/Getty Images

This is a fixture to bring memories of frenzied previous meetings flooding back. Even 13 years on it is easy to recall Ronaldinho’s shimmying hips and that shot bereft of back-lift planted beyond Petr Cech from distance or John Terry’s headed riposte which carried the hosts through.

There was the spite which hounded the referee Anders Frisk from football in 2005 or, four years later, the locals’ livid disbelief as Tom Henning Ovrebo dismissed Chelsea’s numerous penalty appeals and Didier Drogba bellowed post-match conspiracy theories into a TV camera.

Hospitals in Barcelona reported a 45 per cent increase in the number of births nine months later, a spike put down to Andrés Iniesta’s stoppage time equaliser at Stamford Bridge.

From six years ago there is Terry kicking Alexis Sánchez and being sent off, Ramires converting one of the great forgotten goals on a galloping counterattack and Lionel Messi belting a penalty on to the crossbar.

That tie confirmed Chelsea’s unlikely progress to the final in Munich and, ultimately, glory. Pedro suppressed a shudder when recalling that night in Catalonia. The Chelsea forward, like his team-mate at Stamford Bridge, Cesc Fàbregas, had been in Barcelona’s colours back then.

“It was so frustrating,” he said. “A very sad day for me, for Barcelona, for all of us. Chelsea were always horrible opponents; compact, strong in defence, pressing very well. We always found it difficult against them. Barcelona’s players will be thinking this tie is going to be very tough because Chelsea are still strong, still compact.

“It was incredible for me to have played in such a special team but now I defend the badge on the Chelsea shirt with great honour and pride. I hope to go through on this tie. And we can take plenty from memories of that match [in 2012] and what can be achieved. It’s not impossible for us to beat Barcelona and go through. It’s difficult because they’re a great team, but not impossible.”

Antonio Conte’s side must emulate that same stubborn resilience which has seen Chelsea unbeaten in their last seven meetings with Barça if they are to progress through this daunting last-16 tie.

The rekindling of their rivalry with the Catalans became the focus of their season from the moment the draw was made in mid-December, when this team’s title defence had long since petered out and progress in domestic cup competitions, while welcome, was not enough to have the juices flowing in quite the same way.

Eliminating the unbeaten leaders of La Liga may not have a direct impact on whether Conte stays on in London beyond the summer, given the fragility of his relationship with the club’s hierarchy, but it would shine a new light on the entire campaign.

Roberto Di Matteo’s Chelsea claimed this trophy in 2012 and José Mourinho’s side reached the semi-finals two years later but exits to Paris Saint-Germain in the next two years fuelled the sense of the emergence of a new order. The London side did not even compete at this level last year. Progress now would serve to re-establish their reputation.

Daunting as the tie is, there remains reason for optimism. Pedro, who claimed 20 major trophies with Barça and scored 99 goals over seven years, acknowledged Messi as “the best player in the world”.

“For him, it’s instinctive and he’s unique. No one can do what he does, so to have played with him is special and something to tell my sons [Bryan and Kyle] in the future, when he’s considered the best in history.”

And yet the Argentinian has never scored in eight meetings with Chelsea, a team who have successfully suffocated his brilliance.

Luis Suárez provides another threat, of course, in a side that has plundered 90 goals this season. But Barça can be blunted. They have scored only once – an own goal by Sporting Lisbon’s Sebastian Coates – in their last five Champions League away games. Espanyol beat them 1-0 last month in the first leg of a Copa del Rey fixture – a solitary defeat in 38 games – while Getafe gleaned a point at the Camp Nou a little over a week ago courtesy of rugged defensive discipline. Getafe had threatened, too, on the counterattack. Similar tactics may represent Chelsea’s best route to reward.

Conte would have liked to start with Eden Hazard and Pedro supporting Álvaro Morata but the last of these, whose only senior goal against Barcelona came for Juventus in the European Cup final of 2015, has been limited to 49 minutes of football in just under five weeks. With that in mind, and with Olivier Giroud a Plan B target man, the head coach is considering Hazard as a false No 9 alongside Pedro and Willian.

The Belgian is often reminded he has yet to decorate the latter stages of Europe’s elite competition. Hazard’s decision to move to Chelsea – “I’m signing for the Champions League winner,” he tweeted nine days after the final victory over Bayern in Munich in 2012 – was heavily motivated by the prospect of making his mark on this stage and he scored three times in the group stage.

Now the onus is on him to go head to head with Messi for only the second time, after his country’s defeat by Argentina at the 2014 World Cup, and thrive.

As a tactic, his deployment in that central role fell spectacularly flat recently against Bournemouth and Watford.

“But Barcelona will push further into our half so, when we recover the ball, we can counter quickly and that is one of our strengths,” added Pedro. “We can create chances that way and certainly more danger. We can be confident. If you start with fear, that hands it to Barça.” – Guardian