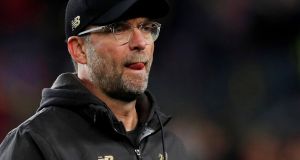 Juergen Klopp: “There is no need to dwell too long on the last game, and in any case we did some really good stuff in Barcelona.” Photograph: Albert Gea/Reuters

Jürgen Klopp continues to look on the bright side after Liverpool’s 3-0 defeat in Barcelona, insisting there will be no hangover at Newcastle and denying he might be fated to spend his life narrowly missing out against superior opposition.

The Liverpool manager has taken two teams to Champions League finals and lost, is in danger of losing the league title to Manchester City with a points total that would have won the Premier League most seasons, and by some metrics could claim to have outplayed Barcelona despite the shattering outcome at the Camp Nou. But he dismissed any suggestion he might feel cursed or doomed to failure.

“I don’t think that way at all,” Klopp said.

“I’m healthy, my family is healthy, I do the job I love so that makes me already a very fortunate person. In football if you want to win you have to accept that there are occasions when you might lose.

“There is no need to dwell too long on the last game, and in any case we did some really good stuff in Barcelona. We didn’t have to give the players a hug or anything like that; we can still have positive thoughts about the game.”

Klopp revealed he rested Jordan Henderson in midweek – at least that was his intention, before Naby Keïta’s injury – because he wanted to keep him fresh for the remaining league games.

“Everyone seems surprised because it was such an important game, but we had three games in six days to think about and they are all important,” he said.

“Hendo was the only midfielder who had played five games in a row so I took him out. Naby hadn’t played the same number of games as the others but then he got injured anyway.”

Keïta’s season is over after he ruptured an adductor muscle. The midfielder faces two months on the sidelines that will put him out of the Africa Cup of Nations.

“It is a high-grade injury,” Klopp said. “That’s bad news for us and bad news for Guinea as well. I know being in Egypt next month was a big target for him.”

“I must admit that would be a fitting way for the season to end,” Klopp said. “We could make a bit of a showdown of it, like High Noon, but I doubt it will happen.”

Tomorrow marks five years to the day since Liverpool blew a three-goal lead at Selhurst Park, prompting Brendan Rodgers, their manager at the time, to concede their title challenge was over. Liverpool, according to Rodgers, had paid the price for trying to play “Roy of the Rovers football” against Palace by chasing down Manchester City’s superior goal difference rather than concentrating on winning the game.

There would be no comic-book ending for that Liverpool side, who came up two points short after winning only one of their last three matches, and Rodgers was sacked 17 months later.

Now, in one of those strange twists of fate that football occasionally throws up, Liverpool could do with a favour from their former manager, who takes his Leicester side to the Etihad Stadium on Monday night, six days before the end of the season – exactly the same stage as that wild game against Palace – and with a chance to be an Anfield hero all over again.

Yet if Rodgers is feeling even remotely sentimental about Liverpool, he is doing a good job of disguising it. His sole focus is on trying to get a result for Leicester, he insists, while all the talk of parallels between Liverpool’s title pursuit in 2014 and their challenge under Jürgen Klopp now is quickly dismissed.

Rodgers says it is a “different dynamic” at the club these days and agrees with the comments Luis Suárez made in an interview with the Guardian last weekend, when the Barcelona forward said if Liverpool had won the league five years ago “it would have been an even bigger achievement than if this team do” because they never had the same quality or spending power.

“I think you can’t really compare,” Rodgers says. “I was there at a time when everything was based on potential. Raheem [Sterling]was 17, Philippe [Coutinho] was 19, we had loan players.

“I think what Liverpool have done really well in the last couple of seasons is recognise if there’s a gap to be filled in the squad and you really need it, you’ve got to pay for that quality. In my time there, and Jürgen’s early time, the talk was about defence. What do you do? Bang, put in a world-class £75m player and a world-class goalkeeper and it changes the whole dynamic.

“So, what Luis is referring to is, at that time, that never happened. That’s just strategy. At that time at Liverpool when I went in there, over £30m had to come off the playing budget. When I arrived we were eighth and losing players like [Alberto] Aquilani and Maxi Rodríguez, who was a top-class player, because the strategy was to bring through a younger team and try to evolve it from there.

“We had Luis, who was fantastic, some other young players, and were bringing players in like Aly Cissokho on loan. So it’s totally different. Our journey in those couple of years was great. Now it’s about investment and they’re doing very, very well.”

Rodgers will come up against one of the key figures from that 2013-14 Liverpool side on Monday. Sterling made his full Premier League debut under Rodgers as a 17-year-old – against Manchester City of all teams – and went on to form a devastating three-prong attack with Daniel Sturridge and Suárez during that title-chasing campaign.

“What I loved about Raheem was that for a young boy he knew what he wanted to be,” Rodgers says. “When I ask young players what is it they want to achieve, he wanted to be one of the best players in the world at that age [17]. And that was where he was unique, because sometimes the British players may not have that ambition.

“Off the pitch he’s an incredible kid. He’s very loving and supportive of his family. You see a lot of the things that he does, and that’s not just now – that’s how he was back then as a young boy. He had a great base at Liverpool and then went on. He’s taken his game to a level where he’s clearly one of the best players in the world. He’s a great talent and a great father as well – he would bring his daughter around to the house to play. So he’s a really special player and a really great boy.”

Although everything had turned a little sour by the time Sterling moved to City in the summer of 2015 for a fee rising to £49m – Liverpool’s £100,000-a-week contract offer had been flatly rejected – their relationship has not been damaged. Sterling gave Rodgers his shirt after City played Celtic in the Champions League, and the Northern Irishman refuses to believe that anything other than football was at the heart of the player’s desire to leave Anfield.

“For Raheem it was never ever about money. If it was about money he could have stayed at Liverpool. It was about being the best he can be. And in that moment there was an opportunity to go to Manchester City where they had top-class players. He’s gone in there and developed and become a winner, which is clear to see in his game. I look at Pep Guardiola’s team and it’s not the same if he’s not in it. What a testament that is to a young English player.”

The challenge for Rodgers is to find a way to nullify Sterling and the rest of the Manchester City side. From Liverpool’s point of view, the good news is that Leicester have been rejuvenated since Rodgers was appointed, taking 16 points from eight matches to keep alive faint hopes of qualifying for the Europa League.

Jamie Vardy has scored 11 goals in his past 11 matches and Rodgers spoke on Thursday about having “a game and a model that can beat any team”.

Although the manager went on to give the impression he has had little or no contact from people connected with Liverpool this week, it is hard to believe that will remain the case if Klopp’s team win at Newcastle today.

After all, Rodgers worked with many of the current Liverpool players and still has plenty of friends at Anfield as well as a house on Merseyside, which he has been letting to a German for a little while now. Klopp, by all accounts, is an excellent tenant and always pays his rent on time. Maybe his landlord could do something for him in return.