Midfielder will miss remaining games, starting with clash against Newcastle 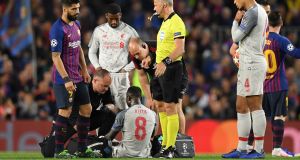 Naby Keita of Liverpool is seen to by medical staff after he got injured during the Uefa Champions League semi-final first leg against Barcelona. Photo: Matthias Hangst/Getty Images

Liverpool midfielder Naby Keita’s season has been prematurely ended by a groin injury but it may offer a late opportunity for Alex Oxlade-Chamberlain to play a significant part in the season finale.

Guinea international Keita has taken a while to settle since his summer move from RB Leipzig but in recent weeks had started to show the form which persuaded Jurgen Klopp to spend £52.7million and wait an additional 12 months for him.

However, he limped off midway through the first half of the 3-0 Champions League semi-final first leg defeat to Barcelona in the Nou Camp on Wednesday and will now not be fit to return until pre-season training begins in July.

Oxlade-Chamberlain has played just 17 minutes of first-team football after a year out with a serious knee injury but after coming on as a substitute in the 5-0 win over Huddersfield he is ready for more game time.

And it could give Liverpool a boost after the loss of Keita, who will now miss this summer’s African Nations Cup as well.

“It was really unlucky. Bad news, he has a high grade adductor injury, the tendon is ruptured, which keeps him out for at least two months,” said Klopp , who will be without the midfielder for Saturday’s trip to Newcastle as well as home games against Barcelona and Wolves on the final day of the season.

“Bad news for us obviously but bad news for Guinea as well because the Africa Cup of Nations is coming up.

“He was in a really good moment, but that’s how football and life sometimes is. Not too nice but very serious.

“For sure he’s not in the best moment but it’s OK I think. There are two things: a very interesting part of the season he’s not part of, on the other hand Guinea I don’t think is a regular (qualifier) for the Africa Cup of Nations.

“That was, for sure, a big target for him as well so he is not in a good moment. That’s a moment when you have to help the players, we try everything we can.”

On the role a fit-again Oxlade-Chamberlain could play Klopp added: “”Yeah, of course. It is perfect that he is back but for the intensity of the game we will see.

“It is very good that Ox is there and for sure he will be in the squad but we have to make a decision who starts. We will use him, of course.

“There is nothing good to say about Naby’s injury but Ox being back is brilliant, yes.”

Klopp also has an injury worry over Roberto Firmino, who was only fit enough for an 11-minute substitute role in the Nou Camp after tearing a thigh muscle in training last week.

The Brazil international is unlikely to be risked at St James’ Park with the crucial second leg at home to Barcelona to come.

Midfielder Georginio Wijnaldum will probably not be asked to perform the false nine role against his former club, although Klopp hit back at the pundits who criticised him for playing a midfielder instead of a striker in the position.

“It was quite a big task. When I told him that he plays the position he was surprised, obviously,” said the manager.

“We needed this kind of player, an offensive player who is quite good in defending as well because we could not ignore the quality of Barcelona.

“I know that people outside (the club) said it was easier to play another striker but there are different jobs to do on the pitch and Gini did really well.

“In a game like this, in a really small space and a completely new position for him — he played it in Holland and maybe at Newcastle — he is the player to do it.

John Cooney called into Ireland squad for France clash 10:58
All in the Game: Klopp’s Amsterdam subs don’t go down well 10:00
The Offload: Outgoing Tom Grace will be missed by IRFU 10:00
Madness or defiance? The GAA is taking a huge gamble in staging Championships 06:00
Limerick’s warning loud and clear despite the eerie silence in Thurles 06:00