Pedro grabs vital away goal for Chelsea in Frankfurt 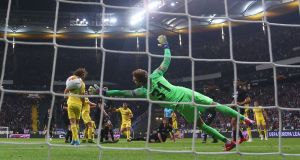 If this was the first daunting challenge flung at Chelsea on this schlep of a Europa League campaign, then it was a test Maurizio Sarri’s side passed. The momentum is with them ahead of next week’s return with an away goal acquired and Eintracht Frankfurt’s early enthusiasm in the semi-final first leg having given way to choked realism by the end.

There was a flurry of late chances that the home side might have taken, but, in truth, quite how the visitors did not inflict the Germans’ first home defeat in this competition will be a source of exasperation given the number of better opportunities passed up during a dominant second half. Given how awkward Chelsea had found the early stages, it still seemed something of a triumph to have recovered authority and imposed themselves on the contest. Ruben Loftus-Cheek was imperious, Eden Hazard was scarcely used and will be refreshed for what lies ahead. Sarri’s team will be roundly encouraged – they remain on course for Baku.

This had been billed as Eintracht Frankfurt’s most significant European occasion since they won the competition in a two-legged final 39 years ago, with the din whipped up by the local ultras, to the beat of the drummers at the front of their two-tiered stand, a reflection of the thrill with which they had greeted the tie. There had been concerns that injuries, suspensions and the slog of a season might blunt their approach, though they had actually bullied their visitors through the early exchanges. Chelsea appeared to quail in the raucous atmosphere. That they would recover their poise to draw level by half-time was impressive.

How the Bundesliga side must have cursed a moment of indecision as the break approached. David Luiz might have converted Willian’s corner only for Eintracht to scramble the ball away, but they could not wrest it from Loftus-Cheek – a player enjoying the most impressive form of his career at the club to date, and only marginally wide with an effort moments earlier – on the edge of the penalty area. The England midfielder calmly found Pedro at his side with the Spaniard taking a touch, then ripping a shot beyond Kevin Trapp.

That deflated the hosts, who should have made more of Danny da Costa’s early incision down Chelsea’s left flank, or the skewed attempt by the captain, David Abraham, when he was found by the excellent Filip Kostic’s free-kick early on.

They must have started buoyed by their opponents’ selection. Sarri’s decision to start Hazard on the bench, citing “five matches in two weeks” to come, seemed risky, not least because the fifth game still had to be earned. Chelsea had appeared diminished without their playmaker. The Italian would complain bitterly to the fourth official over the non-award of a penalty when Olivier Giroud crumpled to the turf after grappling with Martin Hinteregger, but that was born of frustration. By then, his team trailed.

It was Luka Jovic, the striker coveted by Europe’s elite, who had forced the hosts ahead after Giroud had surrendered possession deep inside Frankfurt territory. Three passes through midfield liberated Kostic down the left, with his fizzed centre met by a stooping Jovic, between centre-halves but standing beyond the penalty spot, who placed his header delicately across Kepa Arrizabalaga to skim in off the far post. It was the 21-year-old striker’s 26th goal of the season, as many as he had managed in his previous five campaigns combined.

It was his ninth in this competition alone though, in the absence of Sébastien Haller and Ante Rebic, so much had depended upon Jovic to make an impression on the visitors’ rejigged back-line.

That task was made harder with Chelsea reinvigorated by Pedro’s goal, sensing their hosts’ doubts and threatening to make inroads of their own on the break. Loftus-Cheek might have forced them ahead after driving through the middle yet again and exchanging passes with Pedro, only to side-foot a shot over the bar. David Luiz was more accurate with a free-kick from distance which Trapp, leaping up to his right, tipped on to the crossbar.

Hazard’s introduction for the hobbling Willian added to their armoury, with the German side suddenly prone, anxious and apparently there for the taking. Loftus-Cheek would again force Trapp into a smart stop, with the former Paris Saint-Germain goalkeeper subsequently doing well to react to David Luiz’s sharp near-post header from Hazard’s free-kick. Those escapes did at least provoke a response from the home side, with Abraham again guilty of a bad miss before the end. But the parity confirmed at the end confirmed the advantage lay with Chelsea. – Guardian

Patrick Cantlay takes Zozo Championship after late ambush 11:10
John Cooney called into Ireland squad for France clash 10:58
All in the Game: Klopp’s Amsterdam subs don’t go down well 10:00
The Offload: Outgoing Tom Grace will be missed by IRFU 10:00
Madness or defiance? The GAA is taking a huge gamble in staging Championships 06:00

1 Seán O’Brien: Anger over my parents’ break-up never left me
2 Madness or defiance? The GAA is taking a huge gamble in staging Championships
3 All in the Game: Klopp’s Amsterdam subs don’t go down well
4 Will Connors chops his way to the front of Ireland’s openside queue
5 Plenty of positives for Farrell as Ireland hit the ground running
Real news has value SUBSCRIBE
Crossword Get access to over 6,000 interactive crosswords