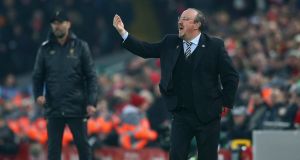 Rafael Benitez: the former Liverpool manager could be overseeing his last home game for Newcastle when Klopp’s side continue their title pursuit on Tyneside on Saturday night. Photograph: Jan Kruger/Getty Images

Jackie Milburn stands poised, the No 9 on his black and white shirt prominent. He is looking leftwards, in the direction of the ball which has just been headed by his Newcastle United team-mate Jorge ‘George’ Robledo. The Arsenal goalkeeper, George Swindin, has his arms outstretched.

Above this image clearly painted by a child are the words: “John Lennon June 1952 AGE 11”. Beneath it is one word: “Football”. It is some picture.

John Lennon is usually regarded as having been indifferent to the game, a peculiar stance for a man from a city, Liverpool, consumed by football.

But Lennon produced evidence to the contrary when designing the sleeve notes for his 1974 solo album, Walls and Bridges. He included this painting he made as a boy, presumably copied from newspaper photographs, of the definitive moment from the 1952 FA Cup final between Newcastle and Arsenal: Robledo’s winning goal.

It must have come as a surprise to Geordies to see this reproduced 45 years ago, although as Lennon would have pointed out, back in Liverpool his first house was on Newcastle Road. Fittingly, Lennon lived in No 9.

The Beatles recorded ‘Revolution 9’ – and on this solo album is the song ‘#9 Dream’. They have had a few of those on Tyneside.

“I lived in 9 Newcastle Road,” Lennon once said, “I was born on the 9th October. It’s just a number that follows me around.”

Milburn and Robledo were not the only Newcastle United players to make their way onto a Beatle’s artwork. Albert Stubbins, as Beatlemaniacs know, was the lone footballer among 71 faces who appeared on the cover of the album Sgt Pepper’s Lonely Hearts Club Band.

Stubbins came from Wallsend on Tyneside and was transferred from Newcastle to Liverpool in 1946. As Liverpool’s free-scoring centre-forward, Stubbins was a name Lennon – and McCartney – were familiar with.

On completion of Sgt Pepper, Paul McCartney sent Stubbins a copy and included a note: “Well done, Albert, for all those glorious years of football. Long may you bob and weave”.

Stubbins was back in his native Newcastle by then. He represents one of many strands that have overlapped to link Newcastle United and Liverpool down the decades, Rafa Benitez being the latest tie that binds. On a day like this, these connections are as pertinent as ever.

Tonight Liverpool travel to a city of walls and bridges knowing that they cannot win a first title since 1990 but they can, effectively, lose it.

If Liverpool are beaten for the second time in 37 Premier League games this season, it would mean Manchester City could retain their title on Monday night with victory over Leicester City.

A draw at St James’ Park would take Liverpool level on 92 points with City, but Pep Guardiola’s team will have a game in hand and a superior goal difference of four. It turns out City’s 6-0 trouncing of Chelsea in February could be the numerical result of the season.

This may seem to frame Liverpool’s visit to St James’ in an unduly negative context – after all Newcastle have lost nine, that number again, at home in the league.

It is, though, six years since the Reds won at St James’ Park – 6-0 remarkably.

At the back of Tyneside’s mind is another game between the two clubs. It also entailed a chase for the title and an epic televised collision. It came in April 1996 as Kevin Keegan, once Liverpool’s most cherished player, led Newcastle United towards a first league title since 1927.

Along with Alex Ferguson’s revived Manchester United, Keegan’s vivid Newcastle team lit up those early years of the Premier League. Newcastle’s title challenge took them to Anfield where they led 2-1 and 3-2 but lost 4-3 in the second minute of injury-time, Stan Collymore lashing in the winner in front of the Kop as Keegan flopped over the advertising boards. It became the most famous game in the Premier League era and, in defeat, Newcastle were pilloried and praised.

Watching the 4-3 back this week, they did not receive enough of the latter. The bravery, skill and adventure of Keegan’s football was something to behold.

Ultimately, however, it was a night when Newcastle United became acquainted with the feeling of losing something they did not yet possess.

With Man City seemingly unstoppable domestically, post-Barcelona the peril for Liverpool 2019 is that on Tyneside they see their reflection in Newcastle 1996.

Among some Newcastle fans of the era, there is a certain resentment at the manner of Liverpool fans’ celebration that night in 1996. Whether it carries into tonight’s atmosphere is debatable – a 7.45 kick-off on a Saturday night at the beginning of a Bank Holiday is more likely to impact the occasion, noisily.

Plus, there are also Newcastle – and Liverpool – supporters who will recall that two Aprils prior to 1996, Newcastle played at Anfield in the penultimate game of the standing Kop. It was the closest date to the fifth anniversary of Hillsborough and two Newcastle fans in their kits laid a wreath on the penalty spot at the Anfield Road end. The crowd applauded as one; Newcastle fans sang You’ll Never Walk Alone.

“Electric, electric with sadness,” is how Martin Hardy, author of Touching Distance, the book about Newcastle’s 1996 team, describes it. There was then, if not so much now, an unspoken kinship between the two fanbases.

Newcastle won 2-0, a sign they were a coming team. Jurgen Klopp’s Liverpool have won enough matches in the past two seasons to say they are in the same category. But they need to win another.

Yet it is not all about them. Unless there is a contract extension agreed and signed, this will be Benitez’s farewell appearance at St James’ as Newcastle manager. His last game will be at Fulham next Sunday.

To say it adds spice is quite the understatement. Benitez loves Liverpool – he retains his family home on the Wirral – and as the Reds manager responsible for the club’s last great triumph, Istanbul 2005, he is adored by so many Liverpool supporters.

Benitez is also treasured by the majority of Newcastle fans. They would like to see him set free to exploit the club’s potential. So how he approaches tonight will be under 360degree scrutiny.

Speculation about permutations will be non-stop. Howard Gayle, one of many Liverpool players to move to St James’ Park, once said: “On a Friday night in Newcastle’s city centre, you could sense a football match was going to happen the next day.”

It has been like that for about a fortnight on Tyneside and the anticipation will roar through the hours.

Benitez provides Newcastle fans with their own issue. This could be the end of something. Liverpool, meanwhile, must focus on scaling the the walls and bridges of Tyneside by any means necessary.

It will be electric with tension. The pressure on Liverpool is as it was on Newcastle 23 years ago and Klopp would surely shake hands on a scruffy 1-0 win now. The hows and whys would be for later.

To go back to John Lennon, his signature song from ‘Walls and Bridges’ was: ‘Whatever Gets You thru the Night’.