Solskjaer will stick with ‘fantastic’ De Gea against Huddersfield 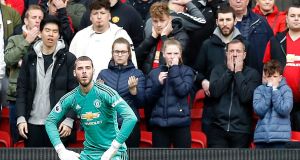 Crowned United’s player of the year in four of the past five seasons, there is little chance of the 28-year-old picking up the award again this term given the way things have gone recently.

De Gea has made a serious of high-profile blunders as talk about his future continues, with last weekend’s gaffe allowing Chelsea to seal a 1-1 draw that hampers United’s top-four hopes.

It has led to widespread debate about whether the goalkeeper should start at Huddersfield, but Solskjaer confirmed that the Spaniard will play this weekend.

“I would think so, yeah — or he will play,” Solskjaer said.

“Sergio was injured yesterday so he didn’t train. He tweaked his knee and David’s been training well this week.

“Of course we trust him, he’s been fantastic this season. Towards the end now he’s been in the headlines maybe for the wrong reasons, but, as I’ve said so many times, he has to deal with that.

“The goalkeeping department are a fantastic group together, with Emilio (Alvarez, goalkeeping coach), Sergio, Lee (Grant) and David.

“They’ve been such a tight-knit group, so they’ve experienced better times obviously than just now but he’s ready for Sunday.”

Asked if Romero would have started at Huddersfield if he had not sustained a knee injury, Solskjaer said: “Ifs and buts and hypothetical questions. Sergio knows how highly I rate him.”

Eric Bailly will miss Sunday’s trip due to a season-ending medial ligament injury in his right knee, while Solskjaer ruled out teenager Mason Greenwood with an issue of his own.

Paul Pogba, Romelu Lukaku and Jesse Lingard were conspicuous by their absence from Wednesday’s part-open training session, but forward Marcus Rashford was involved after a shoulder issue.

“We’ve got a few niggles and a few injuries,” said Solskjaer, who was spiky when asked the names of those doubts.

“We’ve still got two days, today and tomorrow, to see who gets on the pitch. We missed a few last week.”

United desperately need a shot in the arm at the John Smith’s Stadium after losing seven of their last 10 matches in all competitions.

It leaves sixth-placed United three points off the Champions League spots with two games remaining, and facing the prospect of trying to attract elite players to a side playing Europa League football next term.

“In the long-term planning, we have to think about we might be in the Champions League next year because we’ve got a chance,” Solskjaer said.

“We might not be, and you would be surprised how many agents have been touting their players... not touting, that’s not the best word, is it? It’s just like telling us that their players, their clients, would love to be a part of Man United in the future.

“That’s just the lure of Man United because they know, with the potential here, the size of the club, that we will in the end get back to good days.

“Yeah, we’re having a tough time at the moment. We’ve had a few seasons that we’ve not got up to the standards we expect. But that’s up to me, up to the club that we change it as quick as possible.

“If it’s a season without the Champions League, who knows? But players still want to come to Man United and you probably wouldn’t be surprised but you would be surprised on the names that you get asked.”

Noise around transfers is increasing as the summer edges closer, so too talk around United’s search for a technical director.

“I’ll have a final say if players come in or go out and we’ve got regular meetings,” Solskjaer said.

“I’m happy with the way it’s going and we’re supposed to sign 250 players because you are all writing about players that we should sign.

“Hopefully we can get players in that you haven’t written about as well, you never know.”

1 Dreal Deal’s Navan win to be investigated as huge gamble lands
2 The Offload: Saracens prove Pro14 is not fit for purpose
3 Born to ride, born to win: Sam Bennett, the making of a green machine
4 Bryson DeChambeau trainer insists muscle gain is not down to steroids
5 Two in custody in Tour de France doping investigation
Real news has value SUBSCRIBE