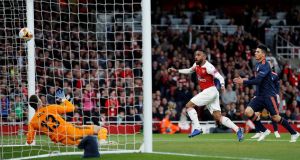 What a difference a week makes. Arsenal rediscovered their verve to give themselves a fighting chance of reaching the Europa League final in Baku at the end of May. Attack has to be their best form of defence and their two shining lights at the front of the team delivered to give them a 3-1 advantage to take to the Mestalla next week.

What a difference a late goal makes, too. Going into stoppage time they were entitled to feel fretful about a 2-1 lead, a scoreline that felt fraught with danger going into an away leg. One last push delivered the extra helping they require to travel to Spain with more confidence.

Arsenal’s mission for this season was always to get back into the Champions League by any means possible and, after a dismal week spent stumbling through three Premier League defeats with no redeeming features, Europe arrived with an extra frisson of pressure.

If recent tumbles taught Arsenal anything it is that they may as well throw caution to the attacking winds because, well, they certainly cannot rely on trying to be cautious. Wounded by the nine goals conceded in a week, defensive confidence was shaky and Valencia began intent on targeting that weakness.

They threatened after Sokratis Papastathopoulos crunched through Mouctar Diakhaby, and from the resulting free-kick Arsenal’s marking evaporated. Daniel Parejo’s floated ball was whipped across by Rodrigo and somehow the ball ricocheted over the bar from close range. It should have been a warning. But then again, they should be on a state of constant high alert with high balls.

From their next similarly composed attack Valencia plundered an away goal. Parejo’s driven corner caused panic. First Papastathopoulos was beaten in the air by Rodrigo, and Diakhaby was outnumbered as the ball came across, surrounded by Granit Xhaka, Shkodran Mustafi and Alexandre Lacazette. No prizes for guessing who showed the most single minded determination to meet the ball, Diakhaby gleefully nodded in.

Arsenal found themselves anxiously overrun as Valencia pounded forwards. Parejo’s long-range effort was beaten away by Petr Cech and Ainsley Maitland-Niles was relieved to see his casual backwards header went unpunished on the follow-up as Gonçalo Guedes dashed in.

Such was the intensity of the occasion, and the craft with which Valencia popped the ball around in midfield, it was a tough challenge for Matteo Guendouzi, the youngster selected ahead of Lucas Torreira.

Emery has profited from some excellent home performances in this competition, and found a groove by piling all his attacking players into the mix. Aaron Ramsey’s vibrancy and leadership played a vital part in that but since damaging his hamstring at Napoli he can bear no more influence on the team. Arsenal would have to do this the hard way, and they found a response when their two front men, Lacazette and Pierre-Emerick Aubameyang, combined suddenly with speed and accuracy. The Frenchman, inside his own half, spun away and drove the ball forwards for his partner. Aubameyang drew the attention of Neto and found a yard of space to look up. He spied Lacazette hurtling into the box and the finish was crisp into an empty net.

Lacazette was fired up, and six minutes later headed his team in front. Xhaka’s lofted pass from the left provided a tempting invitation, and he left his marker behind to nod the ball down into the ground on its way to goal. Neto scrambled to reach it but could not get a strong enough grip to prevent the ball from crossing the line.

Xhaka teed up Aubameyang with another precise pass but this time the striker’s instinct proved evasive. Valencia threatened again after the break and were indebted to Mustafi for not making a hash of it and bundling the ball away. All the back three needed to be brave. Papastathopoulos harried and chased. Laurent Koscielny produced a superbly timed header to intercept as Guedes lurked hunting a clear sight of goal from close range.

It was a delicate balancing act for Arsenal, endeavouring to keep a semblance of defensive calmness while also probing for the additional goals needed to give them more of a leg up for the second leg next week in Spain. There was recklessness in the air, as if anything might happen.

Lacazette was presented with wonderful chances to help his team and claim his hat-trick. When Aubameyang danced past Gabriel and chipped in a perfect cross Lacazette miscued his header. The gasps intensified as he contrived to squander another chance, aiming near post and allowing Neto to save with his legs.

Back came Valencia and Cech smothered brilliantly at Kevin Gameiro’s feet. The coup de grace fell to Aubameyang, who appeared at the far post to angle home Sead Kolasinac’s driven cross. All to play for next week in Valencia. – Guardian

1 Owen Doyle: Creeping professionalism of schools rugby a threat to the game
2 Rugby under threat; Niall Quinn steps into FAI breach
3 Scotland’s Finn Russell missed training after Sunday drinking session
4 Niall Quinn happy to step into the breach at FAI
5 GAA officials and referees brace themselves as new rules kick in, and this time it's for real
Real news has value SUBSCRIBE
Crossword Get access to over 6,000 interactive crosswords