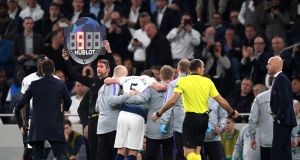 An injured Jan Vertonghen of Tottenham Hotspur is given assistance as he is substituted during the Uefa Champions League semi-final first leg match against Ajax. Photo: Shaun Botterill/Getty Images

The club said in a statement that, after an assessment with an independent neurologist on Thursday, concussion had been ruled out.

The Belgium defender suffered a sickening head injury in the Ajax clash and — after briefly trying to return to action — retched on the side of the pitch and had to be helped down the tunnel, barely able to walk unaided.

The decision to allow Vertonghen to come back on has sparked a debate about concussion protocol, even though Spurs say their defender passed all relevant tests — and their treatment and actions have been backed by Uefa.

Vertonghen came through further tests on Wednesday and an independent specialist has also ruled that concussion was not suffered, though did advise a short rest, making him unlikely to play in the Premier League game at Bournemouth on Saturday.

A club statement said: “Following a thorough review over the past 48 hours by our medical staff as well as by an independent neurologist with special interest in sport-related concussion today, it has been concluded that Jan Vertonghen did not suffer a concussion during Tuesday’s Champions League semi-final first leg against Ajax.

“The Belgium defender suffered an injury to his nose due to a challenge during the game which resulted in heavy bleeding. He was deemed fit to continue playing after an on-field assessment. All Football Association concussion guidelines were followed.

“Jan was immediately withdrawn as a result of the player informing medical staff that symptoms were developing suddenly and that he no longer felt stable standing up.

“We have been advised that this was the result of a presyncopal episode, a near faint.

“The specialist has recommended that the player undertakes a brief period of rehabilitation before returning to training.”

Brain injury charity Headway has called for ‘concussion substitutions’ to be used to allow medical staff more time to assess injured players — an idea that FIFA is open to discussing.

Headway chief executive Peter McCabe said in a statement: “We are delighted to hear that Fifa is finally willing to listen to our repeated calls to do more to protect players from concussion.

“For many years we have been saying more needs to be done, but these calls have been ignored.

“There have been repeated high-profile incidents highlighting the inadequacies of concussion protocols in the sport, along with an apparent inability or disinclination to enforce them.

“It is vital that we better protect footballers from the dangers of continuing to play after sustaining a concussion — particularly those playing at grass-roots level.

“Introducing temporary concussion substitutes, and allowing for longer, off-pitch assessments to be made, is one simple way to address some of the shortcomings in the system.

“If Fifa and Uefa are indeed ready to accept change needs to happen, we would be delighted to meet with them to assist in the process.”

And Spurs boss Mauricio Pochettino is also open to any changes that could be made to help the situation.

“Always in that situation, I’m more than open to improve the decisions,” he added. “I think the most important thing for us is — and always will be — the health of the players.

“The game, the result in the semi-final of the Champions League is less important than the health of the players. That’s our priority always.

“I don’t know if we need to change the rules, have another doctor. I don’t have the capacity to make some decisions.

“For me, at every single of my clubs, Espanyol, Southampton and now at Tottenham, the doctors are independent, all the decisions they make are protecting the health of the players. That’s my rule.

“If the doctor says he has some doubt I am more than happy to change the player.

“I am not going to put any player in risk.

“Then it’s about creating a debate and finding the best solution. For me it is so easy, if the doctor has a minimum doubt I am more than happy to support the doctor.”