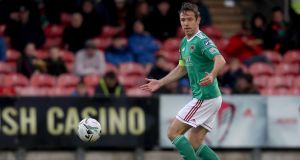 John Cotter has hinted Alan Bennett may be about to give up playing after taking on a coaching role, along with Colin Healy, in the Cork City management setup following John Caulfield’s departure.

Speaking ahead of Friday evening’s game at Bohemians, interim manager Cotter said that morale around the squad is good despite the poor run of recent results and upheaval this week but that there are major doubts about the fitness of Colm Horgan and Gearoid Morrissey for the Dalymount game while Garry Buckley, he said, is only “50-50”.

Asked about Bennett, he said the defender’s position is “slightly different now”, but pressed on whether the 37-year-old would continue to feature on the playing side of things, he said that that it is “something we will discuss”.

Conor McCormack, Garry Comerford and Dan Casey all come back into the reckoning for the game as City look to steady the ship with a repeat of the win they managed over Bohemians at Turner’s Cross a couple of months back. Bohemians boss Keith long is expected to have pretty much a full squad to choose from.

Like Bohemians, Dundalk will be looking to close the gap on Shamrock Rovers at the top of the table as the league leaders do not play until Saturday evening in Sligo. Dundalk have hit a bit of form since securing a late winner against Bohemians and a repeat of their 2-0 win in Derry would start to put some real pressure on Stephen Bradley’s side.

“It has been good for us the past few weeks,” says goalkeeper Gary Rogers. “We have been able to build up some good momentum over the past few weeks. That win over Bohemians has been key to us. The last-minute goal has allowed us to kick on and we have won four matches since that. The plan is to keep it going now.”

Robbie Benson is still out and there are doubts about Jamie McGrath and Daniel Kelly but Sean Murray and Stephen Nolan come back into the reckoning. City travel with everybody bar Michael McCrudden expected to be available for selection.

Conor Clifford and Kevin Toner return for the visit of Waterford to Richmond Park. Rhys McCabe misses out after suffering a concussion on Monday night while Bastian Hery is suspended for the visitors after being sent off the same night.

Harps manager Ollie Horgan, meanwhile, adds Colm Deasy, Daniel O’Reilly and John Dunleavy to the squad that secured a point at Turner’s Cross as UCD head to Ballybofey for something of a six pointer.