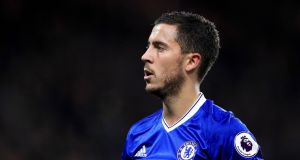 Antonio Conte believes Eden Hazard can satisfy his ambitions at Chelsea, despite Real Madrid’s interest. The Premier League leaders will instigate talks aimed at securing the Belgium midfielder to a new long-term deal at Stamford Bridge.

Hazard, who is the club’s highest paid player on around £200,000-a-week, is contracted until 2020, but is expected sign new terms before the end of the current campaign. He does not operate with an agent and is awaiting Chelsea’s proposal, which is likely to increase his basic wage significantly. He is settled in London with his family and is ready to play his part when the team return to the Champions League next season.

Conte met the club’s director Marina Granovskaia this week to discuss summer transfer targets and contract renewals. The Italian is expected to sign a new deal once the title has been won, with Chelsea intent upon strengthening their squad with Alexis Sánchez, Tiemoué Bakayoko, Romelu Lukaku and Virgil van Dijk discussed. The future of John Terry was also on the agenda.

While the focus has been on recruitment plans, the champions-elect aim to retain those players who have carried all before them this season and the Italian is far from unnerved by Real’s interest in Hazard.

“We are building something important together, but we have only just started our building [work]. If we are able to win the league this season, we’ll be doing an incredible thing because we are in a moment that the club is in transition. We are putting great foundations down to build something important for the future.”

Conte described Sánchez, whose Arsenal contract has 15 months to run, as a top player and has urged the club to make the pursuit of the Chilean the priority rather than Real’s Álvaro Morata, who was a target last summer.

Terry’s one-year deal expires at the end of June and the prospect of another 12-month contract, with the chance to continue his coaching education, has not been ruled out. Given his desire to extend his playing career, the 36-year-old club captain may opt to move, however.

Hazard, who missed Belgium’s games against Greece and Russia with a calf injury, trained normally at Cobham on Friday and will be fit for Saturday’s visit of Crystal Palace to Stamford Bridge as Chelsea seek a 14th consecutive home victory in all competitions.

Diego Costa and Thibaut Courtois may also be available after knocks.