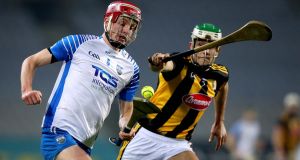 “It’s very 2020,” Joanne Cantwell noted, “that we have All-Ireland semi-finals on the same weekend as the Toy Show.” And, come full-time on Saturday, even though it was still November, Waterford must have felt like all their Christmases had come at once. Mind you, they’ll still be hoping for a surprise on December 13th. Like, maybe, Liam MacCarthy coming down their chimney and resting under their tree.

The general consensus over the weekend was that it’s now inevitable that Waterford and Mayo will win the hurling and football All-Irelands, just to cap all things 2020-ish, with maybe Spurs winning the Premier League and Roy Keane being nice about Fred. By now, we’ve come to expect the unusual.

Like those Zoomy gatherings on TG4, blue- and orange-clad bubbles cheering on the Dubs and Armagh, and Brian Tyers and Rena Buckley wondering how long it would take Nicole Owens to settle after a year out with a severed cruciate, only for her to score a goal after two minutes.

The Dubs prevailed, so some things are still a bit 2019-ish, but not the hurling semis.

“I was walking down Jones’ Road and it was like a ghost town,” said Donal Óg Cusack after arriving at Croke Park for the ashy clash of Waterford and Kilkenny, before wiggling his eyebrows at the team-sheets. “In general you get more information out of North Korea than you do GAA managers,” he’d said a couple of weeks ago about this business of named teams bearing as much resemblance to the actual line-outs as Fred does to Diego Maradona.

Because Brian Cody was wearing a black-and-amber face mask, Damian Lawlor could only see his eyes when he insisted that Kilkenny would line out as announced, although Cody’s heavy breathing, which had his mask pumping, left Damian wondering. But if 2020 couldn’t get any stranger, the teams lined out as announced.

By half-time Kilkenny led by just the seven points. Game done and dusted. “Waterford are not at the races today,” said Donal Óg.

All we can conclude is that Liam Cahill delivered the mother, father, auntie and uncle of all half-time team talks, Waterford producing a second-half display that would have had you purring. “They turned feline on the Cats,” said Donal Óg, the Déise ending up like, well, the cats who got the cream. Now for Limerick.

Jack Charlton was going mad saying ‘come on, get on the bus’. But we said ‘nah, we’re watching Maradona’

If Cody was feeling downhearted, that was nothing next to how Jürgen Klopp felt after Liverpool’s draw with Brighton. Steaming, he was, when he chatted post-match with BT’s Des Kelly, continuing his fatwah against broadcasters for their scheduling which had Liverpool play early Saturday after a midweek Champions League game.

Des was far too polite to point out that the close to £500 million Jürgen has spent on players since he arrived on Merseyside has largely been funded by the broadcasting deal his club’s owners agreed to, a fact that might have taken the shine off the Liverpool manager’s Colgate smile. But the notion that the chat demonstrated that Jürgen is a bad loser (or draw-er) is a hoot. If Jürgen wasn’t a bad loser, he wouldn’t be the manager he is. Gaffers who are chilled about conceding injury-time equalisers to Brighton tend not to prosper.

The footballing weekend, though, was largely taken up with tributes to Maradona. Roy, on Sky, recalled the privilege of watching him train when he was at Seville, Ireland using the same facilities ahead of an international.

“Jack Charlton was going mad saying ‘come on, get on the bus’. But we said ‘nah, we’re watching Maradona’.”

Jamie Redknapp, meanwhile, recalled the time Claudio Gentile fouled Maradona 26 times in a game before getting booked. Twenty-six. If Maradona had VAR, his opponents would have retired.

Channel 4 had the good grace to re-show Asif Kapadia’s biographical film about Maradona, and for those who also saw Dan Gordon’s George Best: All By Himself, they couldn’t but have noted the similarities in their lives. Not least how suffocating they became, smothered, as they literally were, by adoring, frenzied mobs wherever they went, and hangers-on leaching on their brilliance. They could hardly breathe.

“When you’re on the pitch, life goes away,” said Maradona. “For me a football was the most beautiful toy... it was my salvation.” Best, who died on the same date, would, you’d guess, attest to that.