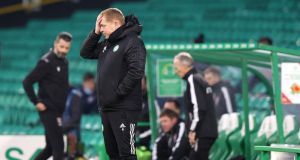 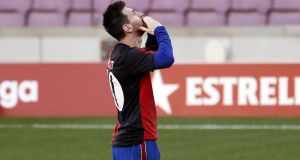 Celtic will investigate protests outside Parkhead after revealing some players had been left “shaken” after being targeted by missiles from their own fans. Hundreds gathered to protest outside Celtic Park after a 2-0 League Cup defeat by Ross County — the club’s first domestic cup defeat in 36 matches stretching back to April 2016. Supporters called for the departure of manager Neil Lennon and players also came in for abuse from some fans as they left in convoy in their vehicles amid a heavy police presence.

A Celtic statement read: “Everyone at the club is hugely disappointed by this afternoon’s result, one which has ended our phenomenal run of 35 consecutive cup victories. “While we sincerely share the huge disappointment of all Celtic supporters, there can be no excuse for some of the violent scenes at Celtic Park this evening. The club will be investigating these events fully.

“For players and a management team, who have given so much in recent years and have delivered 11 consecutive trophies, to require an escort from Celtic Park while being targeted with missiles, is simply unacceptable.

“While we understand that only a small number of people were involved in this behaviour, some of the actions this evening, which have obviously left our own players shaken, cannot be condoned in any way.”

Lennon showed no sign of quitting after the defeat and, when asked if he would understand if the Celtic board took the decision to remove him, said: “No, I think it’s too soon for that. We have lost one trophy, that’s gone. Our priority is the league, it always is, every time we come into a season.

He added: “There’s plenty of time to turn it around. But it’s alright me saying that, we have to show it with action now.I think I should get more time at it but, if not, then so be it.”

Lennon walked into his post-match media conference amid clearly audible protests and said: “It doesn’t make me feel good obviously. We are not in a good moment.”

When asked what would he would say to the supporters outside, Lennon said: “It doesn’t matter what I say or what sort of bravado I put on. It won’t wash. I have to turn it around with results. I can only do that with the players.

“We had a really good meeting on Saturday. It was powerful and a lot of good stuff came out of it. There was a good ambience and atmosphere coming into the game but we just aren’t making it happen.

“Do I see myself as the man to lead the team? Of course. I believe in myself. I am not always going to harp on about what I have done in the past.

“We are in the present and I know the expectations from the supporters and the board for the club. “I am falling short of that at the minute, me and my backroom team.”

Lionel Messi paid a personal tribute to the late Diego Maradona after scoring on as Barcelona enjoyed a resounding 4-0 home win over Osasuna.

Messi adorned a brilliant team display with a thumping shot into the top corner in the second half, after Martin Braithwaite had broken the deadlock and Antoine Griezmann and Philippe Coutinho had scored either side of half-time.

The Argentinian lifted his shirt to reveal a red-and-black replica kit of his hometown club Newell’s Old Boys bearing the No 10 which Maradona wore during his brief spell at the Rosario side in 1993.