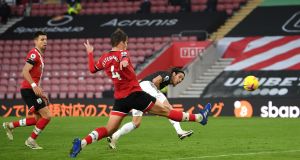 A triumph of pure instinct: an object lesson in digging deep, in taking the game deep and ultimately bending it to your will. For half a game here, Manchester United were distinctly second best: off the pace, run ragged and 2-0 down. But there was something stirring and thrilling in watching them slowly clank into gear, working the game out, running the tape all the way to the end.

And in the second minute of injury time came their reward: a set piece from Bruno Fernandes, who had been so ghostly and absent during that first half. A pinpoint cross from Marcus Rashford, who had produced so little during the game. And finally a brilliant glancing header from Edinson Cavani, who strode on to the pitch for the second half, spent 30 seconds fiddling with his bootlaces, and ended up winning the game with two goals and an assist.

For Southampton, a painful collision with the brick wall of fate. Brilliantly coached and assembled, they began superbly, executing their gameplan to the letter, shoving United off their stride and dragging them out of shape. But this was perhaps a reminder of what they were lacking: the class and quality that wins the big moments, when football ceases to be a game of systems and becomes a game of pure urge.

They had deservedly led through the head of Jan Bednarek and the boot of James Ward-Prowse. But there was so much more to them too: the thrash and the hustle, the sneaky fouls. United’s deficiency was not so much of tactics but of mentality. After a bright start they allowed Southampton to dictate the terms, push them back, sow doubt.

But then this is the thing about Ralph Hasenhüttl’s side: they have a way of saturating you, of running a finger along your hinges, finding your weakness, and then flooding through it. Here it was United’s right flank, where Mason Greenwood frequently failed to track back. It was Victor Lindelöf, who so often finds himself half a step out of position in high-pressure situations.

And it was the set piece, from which Southampton scored both of their goals. You could sense Southampton beginning to step things up about 20 minutes in, Hasenhüttl raising the volume on the touchline, Theo Walcott’s hungry press winning a free-kick from a Fernandes foul, Ward-Prowse’s delivery winning a corner. From the corner, Southampton simply rushed the six-yard box with bodies. Amid a heaving throng, Bednarek rose highest to flick the ball past an unsighted David de Gea. Chaos, the Southampton way.

Occasionally they would turn the hose on themselves. Early on a misunderstanding between Alex McCarthy and Jannik Vestergaard allowed Greenwood a shot from a tight angle. Later McCarthy would pass the ball straight to Greenwood and then reprieve himself with a brilliant double save. And in these lapses we perhaps got a glimpse of what was to come: a Southampton side brilliant at applying pressure but not so good at withstanding it.

Still, for now they were purring. Kyle Walker-Peters hit a post. Moussa Djenepo was ripping United open, drawing a silly foul from Fred on the edge of the area. Ward-Prowse’s curling effort was brilliant, putting not just the ball but De Gea into the net. The keeper would not emerge for the second half, having banged a knee against the post trying to keep the free-kick out.

Dean Henderson replaced him, and had a fine half, but by far the more influential change was the introduction of Cavani for the wan Greenwood. Cavani’s snap, his energy and his experience, his will to impose himself on the game, were just what United had been lacking. On the hour, he picked up the ball on the right wing after good work from Aaron Wan-Bisssaka and Fred and squared for the unmarked Fernandes, who finished serenely.

Now Fernandes, having looked so off colour in the first half, began to dictate. Now Ole Gunnar Solskjær made his first appearance on the touchline, as if personally raising the stakes. Now United’s one-touch football began to click into gear. With 16 minutes left McCarthy came and failed to clear a corner, Fernandes fired in a shot from distance, deflecting and bobbling. Cavani threw himself at the loose ball and diverted it past McCarthy.

And so the stage was set for a showdown. Cavani and Rashford both had chances to win it before finally, against a tiring Southampton, United found the code. Fernandes had the free-kick on the left; it went short to Rashford, and Cavani’s run and header were both perfect. On the touchline, Hasenhüttl kicked a drinks bucket in frustration. He and Southampton had given it their all. But in the end, United had more. - Guardian