Pele leads Maradona tributes: ‘One day, I hope we can play football together in the sky’

‘What sad news. I lost a great friend and the world lost a legend’ 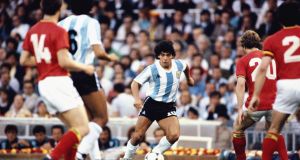 Diego Maradona in action for Argentina against Belgium during the 1982 World Cup at the Nou Camp in Barcelona. Photograph: Steve Powell/Allsport/Getty Images

Pele paid tribute to his fellow all-time great Diego Maradona after the Argentinian’s death at the age of 60, saying: “One day, I hope we can play football together in the sky.”

The Brazilian three-time World Cup winner was often Maradona’s closest competitor in polls to decide the greatest footballer of all time.

And the 80-year-old issued fulsome praise for his fellow South American, writing on his official Twitter account: “What sad news. I lost a great friend and the world lost a legend.

“There is still much to be said, but for now, may God give strength to family members. One day, I hope we can play football together in the sky.”

Maradona’s death was confirmed by Argentina’s football association. He had been in hospital in Buenos Aires after surgery to remove a blood clot on the brain earlier this month.

Argentina eliminated England from the 1986 finals at the quarter-final stage, as Maradona scored twice. The first was a blatant handball – ‘the Hand of God as Maradona described it – and the second a stunning solo effort.

Gary Lineker, who was playing for England that day, tweeted: “By some distance the best player of my generation and arguably the greatest of all time.

“After a blessed but troubled life, hopefully he’ll finally find some comfort in the hands of God. #RipDiego”

Napoli said the death of its former star was a “devastating blow” for both the city and the club.

“We are in mourning,” said club spokesman Nicola Lombardo. “We feel like a boxer who has been knocked out. We are in shock.”

Boca Juniors, where Maradona made his name before securing a then world-record transfer to Barcelona in 1982, tweeted: “Eternal thanks. Eternal Diego.”

Cristiano Ronaldo, who alongside Messi is regarded as one of the game’s greatest current players, also offered his own personal tribute.

The Juventus and Portugal star posted on Twitter: “Today I bid farewell to a friend and the world farewells to an eternal genius.

“One of the best ever, an unmatched magician. Leaves too soon but leaves a boundless legacy and a void that will never be filled. RIP. You will never be forgotten.”