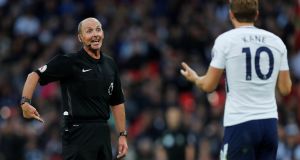 Tottenham’s Wembley woes came back to bite as they were held to a frustrating 0-0 draw by Swansea. Harry Kane hit the crossbar in the second half and Spurs could have had a penalty when Martin Olsson touched the ball with his hand, but Swansea dug in for a hard-earned point.

Mauricio Pochettino’s men looked to have turned a corner at their new base with Wednesday’s pulsating victory over Borussia Dortmund, but this result means they are still winless here in the league this season. At White Hart Lane last term, Tottenham took 18 points out of 18 against the division’s bottom six - a group that included Swansea and Burnley - and that ruthlessness was key to their title challenge.

But so far in the current campaign, Swansea and Burnley have both left Wembley with one point each while Chelsea snatched all three. Kane, who had hit six goals in four games coming in, was kept relatively quiet by a disciplined Swansea back-line, while Dele Alli was lucky to see team-mate Son Heung-min trudge off for Fernando Llorente late on after a particularly fruitless display.

Son had started at left wing-back, with Ben Davies a surprise omission from Pochettino’s starting line-up, presumably rested after his midweek excursions. For Swansea, Renato Sanches retained his place despite an unconvincing debut at Newcastle last weekend, but fellow summer signing Wilfried Bony began as a substitute.

Son gave away a penalty when deployed further back against Chelsea in the FA Cup semi-final last term, but in truth his defensive duties were few and far between in the first period. He flashed a shot at Lukasz Fabianski’s near post early on, but the goalkeeper tipped it wide, just after the Pole had also done well to scramble away a dipping Kane free-kick from 30 yards.

For all Tottenham’s possession, however, the hosts struggled for chances before the break and Swansea should even have made more of a rare counter-attack when Jan Vertonghen and Davinson Sanchez successively failed to clear.

Spurs emerged with renewed vigour after the interval and a more aggressive approach, running directly at their opponents rather than tapping the ball around in front of them. Olsson was twice fortunate not to concede a penalty after first blocking Toby Alderweireld’s progress and then, particularly, touching a loose ball with his hand.

Referee Mike Dean was unmoved. On both occasions, he might argue Olsson was unable to move out of the way.

Tottenham went closest just before the hour mark. Son’s angled shot was saved by Fabianski before Moussa Sissoko cut back to Kane and the forward’s finish rattled the underside of the crossbar.

Pochettino threw on Llorente for his league debut in the hope of a winner against the striker’s former club, but only another penalty claim roused the crowd late on. This time substitute Serge Aurier broke away from Jordan Ayew and into the box before falling to the ground, but the full-back seemed to trip more over his own feet than any contact from his opponent. It summed up Tottenham’s frustrating evening.