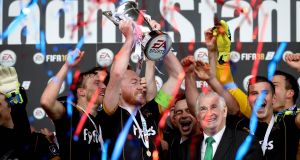 A distant second in the league, Dundalk secured consolation for the loss of their title by becoming the first club to lift some silverware this season with goals from David McMillan, Pat McEleney and Tommy Stewart giving them a comfortable enough win over Shamrock Rovers at Tallaght in the final of the EA Sports Cup.

The Dubliners were forced to chase the game from early on with McMillan finding the net in the fifth minute, but their determination to get back level made an enthralling contest of it. They faded a little after the first half, though, then saw their challenge all but ended when 17-year-old Aaron Bolger’s first cup final was ended by a second yellow card with 25 minutes of the game remaining.

The dismissal, for a reckless follow through that injured Niclas Vemmelund after the teenager had previously been booked for a late challenge on Robbie Benson, left Stephen Bradley’s side badly shorthanded and Dundalk took full advantage.

Last year’s league champions settled in to see the game rather coolly out, slowing the pace, stretching their opponents then upping the tempo as Rovers sought to press forward and left space for their opponents to break into. If Rovers had been a little unlucky to concede that first goal, with Simon Madden almost managing to block it on the line, they had no complaints about the late strikes with Dundalk simply picking them apart.

McEleney’s was the pick of the bunch with Sean Gannon and Jamie McGrath both involved before the midfielder, allowed the time and space to pick his spot, curled the ball into the left top corner from just outside the area.

With the game winding down in time added on for injuries, Stewart then wrapped things up against his former club by calming sliding the ball past Tomer Chencinski after Gannon had played him in.

The sending off had clearly killed the game as a contest and the scoreline left it all looking far more one-sided than had seemed likely through the opening stages.

The early goal had been followed by a prolonged spell of frantic open play with the sides taking it in turns to attacks at pace while their opponents did their best to stay on top of things at the back.

The exchanges produced a succession of half chances but few more clear-cut ones although Michael Duffy looked set to score after leaving two defenders on their backsides as he cut in from the left late in the half. Ronan Finn and David Webster also went close from Brandon Miele corners with Finn first firing a shot into the ground that bounced over and Webster then seeing a glancing header come back off the foot of the post.

As with those chances, the desired quality inside the final third was often missing but it was exciting stuff. Ronan Finn did most to propel Rovers forward through the opening exchanges with the former Dundalk midfielder endlessly anxious to get on the ball then push on but Stephen Kenny’s side held their own in midfield where Duffy and Patrick McEleney both had moments when they seemed to completely unsettle their opponents.

James McGrath, who like Sean Hoare was winning this competition for the third straight season, looked lively at times on his return from injury while Benson, from deeper positions, was consistently alert to any opportunity to win possession and get Dundalk moving on the break.

By the end, they were cruising rather than having to hit their opponents on the counter. Bradley will inevitably wonder what might have been had Bolger not been sent off but he must simply shift his focus to the FAI Cup semi-final between the two sides in a fortnight when Rovers may be playing to salvage something from the season.