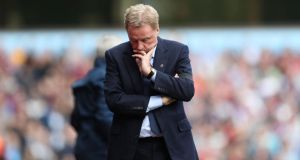 Harry Redknapp has lost his job as Birmingham manager after just 13 games in charge.

The 70-year-old former Tottenham boss was brought in on a rescue mission at the end of last season and succeeded in keeping Blues in the Championship.

But a torrid start to this campaign has seen them win just two of their 10 games in all competitions and the club’s board made their move in the wake of a 3-1 home defeat to Preston.

A statement from City read: “Blues have parted company with manager Harry Redknapp.”

Redknapp — who embarked on a rebuilding programme at City over the summer, which included the club-record signing of Jota — took over after Gianfranco Zola’s disastrous reign last season.

Zola’s appointment was a controversial one following the sacking of Gary Rowett and Birmingham’s board now have another mess on their hands.

Speaking after the Preston game, which saw Daniel Johnson, Jordan Hugill and Tom Barkhuizen reply to Maxime Colin’s opener, Redknapp insisted he was still up for the fight.

“We have got to lift ourselves. There is a team waiting to gel but we have suffered several injuries to key players,” he said.

“Fans deserve better and that was my motivation to carry on this season.

“I do not come to work because I need the money, I enjoy the job and leaving home at 5.15 every morning. I would love to be the manager to bring some success to Birmingham.”

That is a task that will now fall to someone else.