Barcelona come from behind to beat Getafe

Substitutes Denis Suarez and Paulinho get Barcelona out of jail 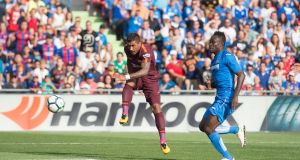 Second-half goals from substitutes Denis Suarez and Paulinho saw Barcelona come from behind to beat Getafe 2-1 at the Coliseum Alfonso Perez, extending their 100 per cent start to the La Liga season.

After big-money signing Ousmane Dembele was forced off on his first league start for Barca with an apparent hamstring problem, Getafe deservedly went ahead in the 39th minute thanks to Gaku Shibasaki’s superb volley.

Suarez levelled in the 62nd minute with a fine strike and Paulinho, whose summer move to Barca surprised many, then netted an impressive winner with six minutes left, bursting into the box and firing in to register his first goal for the Catalan club.

Getafe were hugely unfortunate not to take anything from the game but after a tough afternoon’s work, Ernesto Valverde’s league leaders can reflect on making it four wins out of four.

Earlier, Levante and Valencia maintained their unbeaten starts as they drew 1-1 in the derby clash at the Estadio Ciudad de Valencia.

Both teams entered the match with a win and two draws so far and remain separated only by goals scored in the table after Enis Bardhi cancelled out Rodrigo’s opener.

Rodrigo chested the ball into the path of Andreas Pereira and the on-loan Manchester United man returned the favour by crossing for the 26-year-old to plant home a free header in the 31st minute.

The lead lasted just 10 minutes, however, with Bardhi latching on to a headed clearance to drill home from 12 yards and keep his side above their local rivals.