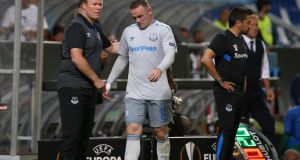 Boss Ronald Koeman emphasised it was time for Everton to wake up after the Toffees produced another woeful display on Thursday night.

Koeman’s men conceded three times in the first half as they were beaten 3-0 by Atalanta in their Europa League Group E opener in Reggio Emilia.

The Dutchman had stressed beforehand the need for Everton, who spent considerably on a raft of new signings over the summer, to “react” in Italy after performing so poorly in Saturday’s 3-0 home loss to Tottenham.

Their subsequent showing drew plenty of boos and jeers from Everton fans at the Mapei Stadium.

And Koeman said in his post-match press conference: “The team is far away from what we need to show. I think most of the players are not at the level we expect.

“It’s now time that we showed this is really the wake-up call.”

Everton’s next match is a daunting-looking trip to Manchester United on Sunday.

Koeman, who made six changes to his starting XI for Thursday’s contest, was in no mood afterwards for making excuses about how the side had performed.

Having said he shared the fans’ anger, he issued an apology to them in the press conference.

He also posted a message on Instagram, in which he said: “A really poor first half in all aspects, without the right attitude and I am responsible.”

And Koeman admitted in the press conference the match had left him questioning his ability to prepare his players.

“I thought it was happening after the third goal against Tottenham, but okay — I need to ask myself the question, what I did wrong.

“What I saw was a big difference between Atalanta and Everton in belief and confidence, and also in aggression and passion.

“It’s easy to criticise the players and individual mistakes but, finally, the team was not prepared judging by what I saw in the first half.”

He added: “I don’t see a team on the pitch. I see 11 individual players.

“We have some new players. Players need time to adapt. They are young. You can find many more excuses, but I don’t like that. I like to be realistic.”

Roared on by their vociferous supporters, Atalanta made light of playing a ‘home’ fixture at a ground around a two-hour drive away from their own — which is being redeveloped to make it fit for European competition — as Andrea Masiello, Alejandro Gomez and Bryan Cristante got on the scoresheet.

After what was the Bergamo club’s first European game since 1990-91, boss Gian Piero Gasperini said: “I think this win will stay in history for us.

“It was an excellent game, and even better was what I saw in the stands. The fans were amazing. For long parts of the second half, they were the real show.”

1 Cheltenham faces criticism after racegoers suffer Covid-19 symptoms
2 Coronavirus crisis could cost the GAA up to €60 million
3 Ian O’Riordan: Learning to run for the first time all over again
4 Cycling Ireland thrilled with take-up for Zwift League series
5 Andrew Conway diary: In search of a competitive edge
Real news has value SUBSCRIBE
Crossword Get access to over 6,000 interactive crosswords