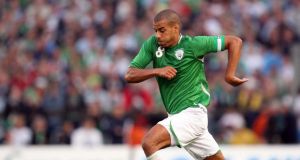 Steven Reid in action for Republic of Ireland in 2006. Photograph: Cathal Noonan/Inpho

Crystal Palace have announced the departure of assistant manager Sammy Lee following the appointment of Roy Hodgson as the club’s new boss.

Lee was initially named assistant under Sam Allardyce in January before taking up the same role during Frank de Boer’s brief tenure at Selhurst Park.

The Dutchman was sacked after just 77 days in charge at Palace and replaced by former England boss Hodgson on Tuesday.

Lee, who has had two spells working on England’s coaching staff, has been replaced by Ray Lewington.

Orlando Trustfull, brought in by De Boer also as an assistant manager, and Ryland Morgans, who was head of performance, have also left the Premier League strugglers.

A statement on the club’s website read: “We would like to thank Orlando, Sammy and Ryland for their efforts during their time in south London, and wish them all the very best for the future.”

Palace have moved to beef up their backroom staff with the appointment of former Republic of Ireland midfielder Steven Reid as a first-team coach.

The 36-year-old has worked on the Reading coaching staff for the past two years after joining them from Burnley following his retirement from playing.