Premier League round-up: Huddersfield continue to hold their own 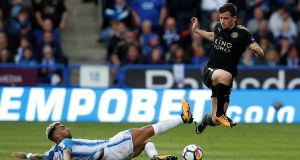 Laurent Depoitre scored on his full Premier League debut as Huddersfield and Leicester fought out a 1-1 draw at the John Smith’s Stadium. Depoitre, a £3.5million summer signing from Porto, broke the deadlock 40 seconds into the second half before Jamie Vardy fired the Foxes level four minutes later from the penalty spot.

Huddersfield will feel mightily aggrieved Elias Kachunga’s second-half header was ruled out for offside, or else they might have bounced back from their first defeat of the season at West Ham last Monday with all three points. But Leicester were not without chances themselves. Vardy contrived to let Riyad Mahrez’s second-half cross to the far post slide by him and both sides deserved their point, particularly after it came alive in the second half.

The game sparked into life after the restart and Kachunga picked out Depoitre in the 46th minute for the big Belgian to shrug off Harry Maguire and fire a low shot from the right edge of the area into the bottom corner.

But Town’s lead was short-lived. Left-back Chris Lowe was adjudged to have brought down Andy King and Vardy slammed his spot-kick straight down the middle to make it 1-1 in the 50th minute. Town fans thought their side had regained the lead in the 61st minute, but Kachunga was deemed offside when he headed home Mathias Jorgensen’s cross. Television replays confirmed Kachunga was onside.

Jamaal Lascelles was Newcastle’s hero for the second time in a week as Rafael Benitez celebrated his return to the dugout with a third successive Premier League victory. Skipper Lascelles powered home a 68th-minute header to help Newcastle edge out Stoke 2-1, in the process securing a third back-to-back top-flight win for the Magpies for the first time since November 2014.

Christian Atsu had fired the home side ahead after 19 minutes, but Xherdan Shaqiri levelled 14 minutes after the restart to set the stage for Lascelles to repeat his feat at Swansea last Sunday, albeit with the help of goalkeeper Rob Elliot, who produced three excellent saves to deny Shaqiri twice and Mame Biram Diouf.

If Newcastle went into the game in good form, so too did Stoke and it was they who made the better start with captain Darren Fletcher and Shaqiri pulling the strings. But it was Newcastle who took the lead with 19 minutes gone courtesy of a flowing move which began when Ayoze Perez held off Joe Allen for Mikel Merino to feed Hayden.

He slid the ball out to Matt Ritchie, whose cross evaded the men in the middle, but feel perfectly for Atsu at the far post as he got ahead of Diouf to fire home from close range.

Stoke once again set about the process of dragging themselves back into the game in the second half and might have done so had Elliot not managed to beat away Shaqiri’s powerfully-struck 51st-minute snapshot. But there was nothing the Republic of Ireland international could do to deny Shaqiri six minutes later when he collected Choupo-Moting’s pass, stepped on to his left foot and drilled a low effort past the keeper’s out-stretched arm and into the bottom corner.

Elliot came to the home side’s rescue once again with 64 minutes gone when he turned away Diouf’s goal-bound header from Shaqiri’s cross with Stoke sensing an opportunity. The Magpies regained the lead four minutes later when Lascelles met Ritchie’s corner with an unstoppable header, but Diouf might have snatched a draw at the death, only to guide Bruno Martins Indi’s cross wide.

West Brom held West Ham to a forgettable 0-0 draw as the Hammers continued to ease the pressure on boss Slaven Bilic.

The visitors claimed their second clean sheet in a week after a 2-0 win over Huddersfield and took their first away point in the Premier League this season.

West Ham remain in the bottom three after five games but there were at least more shoots of recovery for the visitors at The Hawthorns on Saturday.

They lacked a cutting edge but claimed a useful point which could prove crucial for Bilic, even at this early stage of the season.

Pedro Obiang struck the bar from 45 yards but there was little quality from either side, with James Morrison badly missing a header and Kieran Gibbs seeing a shot blocked for the Baggies.

West Brom boss Tony Pulis wanted his side to hit back following their 3-1 defeat at Brighton last week and was rewarded with a clean sheet, if not a victory.

Gareth Barry equalled Ryan Giggs’ Premier League appearance record as he featured in his 632nd game but that was the only memorable moment from a match which left a lot to be desired.