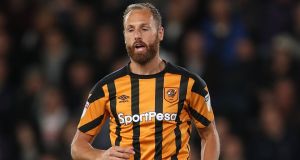 Republic of Ireland midfielder David Meyler rescued a late point for Hull to deny Sunderland a first win in six games, and prevent his team from losing a third in a row.

Meyler came on in the final quarter and secured a share of the spoils with eight minutes remaining. His deflected finish from 12 yards beat Robbin Ruiter at his near post.

Meyler tested the palms of the Sunderland ‘keeper again with two minutes left as Hull hunted down a winner but Sunderland somehow kept them at bay.

Sunderland were again without the services of Aiden McGeady, the Irish winger who had a promising start to the campaign has now missed the club’s last three fixtures.

In the Premier League Stephen Ward and Robbie Brady both played full games - at left back and left midfield respectively - as Burnley held out for a 1-1 draw with Liverpool at Anfield.

Shane Long was handed a rare start for Southampton in their 1-0 win over Crystal Palace. His wait for a goal goes on though, he hasn’t bagged one since February 11th. The Tipperary native’s first start of the season ended in the 90th minute when he was replaced by Manolo Gabbiadini.

Ciarán Clark was at centre back, in front of Rob Elliot who had a fine game between the posts - as Newcastle registered their third win on the bounce with a 2-1 win over Stoke.

For the second Premier League game running James McClean, Ireland’s best player during the recent World Cup qualifiers, was left on the bench as West Brom and West Ham drew 0-0.

McClean came on for Matt Phillips after 76 minutes, while Declan Rice was an unused substitute for the Hammers. Rice is the youngest Irish player to be included in a Premier League squad this season.

Back to the Championship and Middlesbrough twice came from behind to beat QPR 3-2 to move to within a point of the early season play-off places. Irish No.1 Darren Randolph was to blame for one of QPR’s goals however, with his attempted clearance blocked down. Jamie Mackie then tapped into the empty net.

Wes Hoolahan was as an unused sub’ as Norwich became the first side to leave Sheffield United with three points this season.

Reading also snatched a 1-1 draw at Brentford as Liam Kelly’s penalty cancelled out Josh Clarke’s early opener. English-born Kelly had his first call up for Ireland back in March and continues to impress this season.

Richard Keogh was part of a Derby defence which shipped four goals in their 4-1 defeat to Bristol City. While David McGoldrick struck as Ipswich beat bottom side Bolton 2-0.