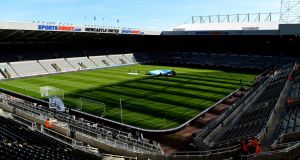 Mike Ashley is negotiating the potential £350 million (€400 million) sale of Newcastle United to Sheikh Khaled bin Zayed al-Nehayan of the United Arab Emirates, but there remains a considerable distance to be covered before a deal is concluded.

Although Newcastle have privately confirmed that discussions are ongoing, several hurdles must be overcome before any change of ownership takes place.

There are also several caveats. Despite being domiciled in Dubai, Sheikh Khaled is a member of the royal family in the neighbouring Emirate Abu Dhabi and a cousin of Manchester City’s owner, Sheikh Mansour.

With the purchase of European sporting clubs by Gulf royals invariably provoked by a desire to exert soft geopolitical power, it has previously been regarded as unlikely that two members of the same ruling family would buy high-profile rival football clubs.

Sheik Mansour’s buy-out of City was conducted amid utmost secrecy and came as a huge surprise. Indeed, as a rule of thumb, the football takeovers which happen tend to be conducted in a similar clandestine manner, so the leaking of details regarding Newcastle’s negotiations with Sheikh Khaled rings certain alarm bells.

Any potential new owner would have to pass the Premier League’s owners and directors test. Negotiations are not believed to have reached that stage but on Monday the Premier League echoed Newcastle’s public “no comment” stance.

It was reported last year that Sheikh Khaled was interested in buying Liverpool but that the owners did not consider the offer.

His discussions with Newcastle and the club’s possible switch to Middle Eastern control perhaps explains the apparent impasse over Rafael Benitez’s proposed contract extension. The manager’s deal runs out on June 30th and he has been in negotiations with Ashley and his representatives for the past 10 days.

Sheikh Khaled – founder of the Bin Zayed Group, a collection of national and international businesses operating in assorted fields including construction and energy – is thought to be keen to retain Benitez. He would hope to be in charge in time to furnish the Spaniard with a sizeable summer transfer budget.

Newcastle have been for sale – overtly or tacitly – for much of Ashley’s 12-year ownership but recently mooted takeovers on the part of first Amanda Staveley and then Peter Kenyon evaporated after entering the due diligence stage.

Ashley has long conceded that he cannot afford to fulfil Benitez’s ultimate aim of attempting to take Newcastle back into Champions League contention but, despite considerable interest in the club, the billionaire retailer has been surprised by the lack of credible buyers.

Regardless of some enduringly nagging doubts, Sheikh Khaled seems to be being taken much more seriously than most. The 61-year-old is president of the UAE sailing and rowing federation but the Boston University business studies graduate is said to have always been a fan of English football and to have long harboured ambitions to buy a club. – Guardian