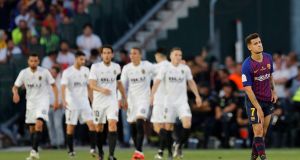 On Saturday night, Barcelona lost 2-1 to Valencia in the Spanish Cup final in Seville. A season that until three weeks ago promised a third treble in ten years has instead ended with just the league title, which for a club with Barcelona’s wildly inflated expectations constitutes a brutal let-down. This summer, everyone agrees, there will be blood.

Many at the club are vulnerable, from the coach Ernesto Valverde down, but it is the club’s record signing who has become the chief scapegoat. The Spanish football press is highly politicised and agenda-driven, but even by their standards the treatment of Philippe Coutinho has been especially vindictive and savage.

After he was substituted on his return to Anfield in the 4-0 defeat, the newspaper AS raged in the player ratings: “He has signed his death sentence as a Barcelona player. He does not deserve to continue wearing this shirt. His performance was one of indolence unbefitting a player of his level.... He has talent, but not the character to play for such a big team... Goodbye.”

This sort of hysterical attack might feel emotionally satisfying in the immediate aftermath of a painful defeat, when all that matters is finding someone to blame.

The problem with substituting vitriol for analysis is that in the end you are not any closer to knowing what just happened. And if you don’t understand what has gone wrong, then you’re likely to make the same mistake.

Why did Barcelona agree to pay a club-record fee of €120 million plus €40 million in add-ons for Coutinho in the first place?

The main reason is that his form over the previous 18 months for Liverpool had been sensational. He was averaging a goal or assist every 92 minutes in league and Champions League play, and scoring in these competitions at a rate of almost two goals every three matches.

But there were also a couple of important reasons unrelated to anything Coutinho was doing on the pitch. First, Barcelona were desperate to add some star quality to a line-up that had started to look a little dowdy since the unexpected departure of Neymar to PSG. And this desire was shared by their major sponsor Nike, who were eager to once again have a high-profile Brazil international in the Barcelona team.

This season, Coutinho’s output has collapsed. His scoring rate has fallen to a goal every four matches, his goal involvements happen once every 221 minutes. According to the baseline statistics, he’s about 40 per cent of the player he was at Liverpool. And these figures alone do not capture the sheer baffled wretchedness of his demeanour.

How can Coutinho have been so good for Liverpool, and then so bad for Barcelona? Sections of the Spanish media, with their constant questioning of his character, apparently would have us believe that he underwent some sudden personality transformation on the flight south from Merseyside, a mysterious metamorphosis in which previously latent character kinks suddenly blossomed into full-blown fatal flaws. A lion got on that plane, and a chicken stepped off it.

You are left to wonder; might there be a less magical explanation? Might his decline be related to the fact that Barcelona expected him to run out onto the pitch and simply pick up where he’d left off at Anfield, with zero allowance for the fact that he had been pitched into a radically different context?

If you look at Coutinho’s career at Liverpool, you see that he combined particularly well with certain players, first in the Rodgers team with the younger versions of Luis Suarez, Raheem Sterling and Daniel Sturridge, and then in the Klopp team with Sadio Mane, Roberto Firmino and latterly Mohamed Salah.

These players all share one obvious outstanding quality: speed. Coutinho is good at dribbling, shooting and passing. Running is not really his thing. But his relative lack of pace and stamina did not matter so much when he played in a side that was packed with high-energy runners.

At Barcelona, he found himself in a side that could be described as more “mature”. Uefa’s data from the 2018 Champions League illustrates the difference: Liverpool’s players ran an average 115 metres per minute in Champions League play – the third-highest figure of the 32 sides involved – while Barcelona’s averaged 103, placing them 29th out of 32.

As for Lionel Messi, the nerve centre through which Barcelona’s entire game is routed; he covered less ground per minute than any outfield player in the competition except the Manchester United centre-back Eric Bailly.

The question of Messi’s “less is more” attitude to getting around the pitch has been much-discussed. This is the way he’s been playing for years and not many would argue that he’s not pulling his weight. Suffice it to say that what works for the best player in the world does not necessarily work for everyone else. And not even Messi’s team can afford to carry many players who share his minimalist approach.

Unfortunately, Barcelona’s current team is full of legends – brilliant players who have won everything and have reached the stage of seniority where they expect other people to do their running.

Coutinho has played most of his football for Barcelona as a winger, but if the other players in the front three are the aged Luis Suarez and Messi, the attack is critically short of speed.

Ousmane Dembele was a much more logical signing to play alongside those two, and if he had not missed so many matches with injury then Coutinho might have spent even more time on the bench than he has. He could in theory play as a number 10 in midfield with a couple of strong runners behind him, but Sergio Busquets is not a strong runner any more, and besides Barcelona already have a pretty good number 10.

The fact is that the job Coutinho could do for this team is already being done by Messi, and there is not really another place where he fits in. This is not his fault, it’s Barcelona’s. This is what happens when you sign a player you don’t need for reasons of commerce and showbiz, without figuring out just what it is that you actually expect them to do.

At least that should be the lesson. If the media commentary is any guide, there’s a risk Barcelona might take another lesson from this – a lesson that conveniently absolves them of any blame – and conclude that Coutinho failed because he lacks the human qualities necessary to play for a big club like Barcelona. And if that’s what they take from it, then the road back to the top will be longer than they’ve bargained for.