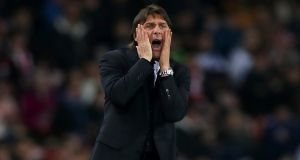 Antonio Conte: There had been fears of a parting with Chelsea even in the immediate aftermath of the title win last year. Photograph: Getty Images

Antonio Conte, clean shaven on the eve of the FA Cup final, digested the question, took a deep breath and then conjured a fresh analogy for an increasingly weary theme.

“Last season was a wonderful season because we reached an important success,” the Chelsea head coach said, his mind retreating exactly 12 months to the raucous celebrations with the Premier League trophy on the pitch at Stamford Bridge. “But then you have to understand the way you won. If your car is going at 300km per hour, or if you are winning while going at normal velocity and aren’t risking burning out your engine.”

The Italian’s audience was picking apart that metaphor when, for those still in the dark, he followed up with a dash of clarity.

“When you win, you must understand which is the best way to improve. Last season we won and we divided [praise for] this big win with the players and the club. This season we finished fifth. We must divide the responsibility between the club, the manager and the players in the same way. If you are intelligent, you understand what is wrong and what is right. And you to try and improve.”

The question, asked before the resumption of hostilities with José Mourinho and Manchester United, had been about whether defeat by Arsenal in last year’s cup final had, in hindsight, provided glimpses of the unravelling which would follow. Whether Diego Costa’s post-match insistence that he would not be forced to China but would hold out for Atlético Madrid, or that glimpse of a team who had taken their eyes off the ball, were a portent of everything unsettling to come. It said much that Conte’s response, impressively inventive in his second language, was effectively a return to a default position.

His sense of dissatisfaction at recruitment policy and perception that the board failed to build on last season’s success infected Chelsea through the second half of his tenure. The drip feed of negativity has lowered the collective mood.

At times it is as if he has been goading Roman Abramovich, a notoriously trigger-happy owner. Quite possibly it was only the unpalatable prospect of a hefty compensation payout that stayed the owner’s hand, particularly after humiliations against Bournemouth and Watford. As it is he would have to fork out £9 million to dispense with Conte’s services but there is a sense that the divorce is imminent.

Chelsea are used to chopping and changing. Theirs has been a boom-and-bust approach under Abramovich, and it has still yielded a trophy haul the envy of virtually every club in the country. Those on the inside accept they can be the victims of the kind of emotive, forthright manager they tend to appoint, though Carlo Ancelotti and others might argue it is a tolerance of relative failure that has been lacking.

What the board has to contemplate is whether it would be to Chelsea’s benefit to dispense with an elite coach who has claimed major reward at every club he has overseen since 2010 – a promotion with Siena, three Serie A titles at Juventus, and, after two years with Italy, last season’s Premier League – transforming a side who had finished 10th into title winners with only three key additions.

Can a club condemned to the Europa League attract a candidate of similar status? Probably. Is there scope financially to lure a Luis Enrique or Leonardo Jardim, Maurizio Sarri or Massimiliano Allegri, plus their respective entourages, while also meting out compensation? Maybe, at a push. It might be worth the cost just to be rid of the whingeing.

An opportunity was passed up once Chelsea balked at Mino Raiola’s fee to restore Romelu Lukaku to Stamford Bridge, or Juve’s £80 million asking price for Alex Sandro.

There had been fears of a parting even in the immediate aftermath of the title win. Relations became so strained over the summer that Conte’s backroom staff, who had mainly been living in short-term lets, moved into a local hotel while they waited to discover if they would be retained. An uneasy truce was secured, with a new contract on improved, if not extended, terms papering over the cracks.

Even the midwinter additions of Ross Barkley, Emerson and Olivier Giroud did not serve to appease.

“I’m a bit of a disaster to convince the club to buy players,” Conte said through a rueful smile in February. “I have to speak more with the managers who are very, very good at persuading their clubs to spend money to buy top players.”

That was an interesting message to send to the new arrivals, the recruitment department and the director Marina Granovskaia, who had assumed Michael Emenalo’s duties.

Then there was the regular damning of Chelsea with praise for Manchester City, whose emergence under Pep Guardiola, secured until 2021, threatens to block any short-term route to recovery. “

They are a club that want to invest and improve,” he said last month. “They did a great job on and off the pitch; they were very well prepared for the season.”

That sniping is unlikely to stop. If Granovskaia, with whom the Italian’s relationship is understood to have been particularly frosty at times, can secure someone more amenable to working within the relative financial constraints of Chelsea 2018 rather than Chelsea circa 2004 – Jardim perhaps – there would be fewer headaches all round.

Thoughts drift back to the infamous text exchange between Conte and Costa. It was no secret the Italian hoped to be rid of the high-maintenance striker but those upstairs had not sanctioned him to communicate it so bluntly. It was as if he did not entirely trust the board to push through the sale, so forced the matter himself.

The schism with Costa did not impress the players. Back in those celebratory scenes a year ago, there was a unity between staff and squad. The endless high-octane training had driven Chelsea, against the odds, to the title. This time round there is a sense of grumbling disquiet. The gruelling sessions left the team 30 points off City. In finishing 10th in 2016, Chelsea had been 31 points from the summit.

Many were baffled by the six changes made against Huddersfield this month just as a semblance of momentum was building in the pursuit of the top four. David Luiz has hardly featured since questioning the management after a humiliation at Roma. Eden Hazard has not enjoyed his guest appearances as a false No 9.

Willian, who has started once since a stroppy substitution in the cup semi-final, was asked about his relationship with Conte by ESPN Brazil this week. “Oh boy, do you really want me to tell you?” he replied. “Well, let’s save it for our next interview.”

Chelsea will be far more reluctant to lose Hazard or Willian than Conte.

All of which suggests a change is in everyone’s interests. Claim the FA Cup and Conte’s reputation would hardly be tarnished. Asked on Friday how it had come to this, he drifted back into introspection.

“I don’t know. My commitment for the club has always been the same. Maybe this season we even worked harder than last season. Last season I ... ‘we’ were heroes for Chelsea’s fans. Now our status, mine and the players, has changed? I don’t know. But, in my soul and my heart, I’m always a hero because I gave 120 per cent to solve the problems.”

Claiming the cup today would offer a triumphant exit of sorts. Some relationships simply have a shelf life.