Robinson and Burke likely to get chance to impress O’Neill 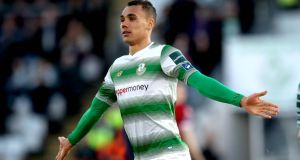 With Celtic poised to make history in the Scottish Cup final, Scott Brown’s testimonial on Sunday might yet end up feeling less like a major football match and more a joyous sporting extension of some crazy St Patrick’s Day Parade.

Even if Motherwell end up spoiling the party, it could still be a big weekend for trebles.

Martin O’Neill admits that the usefulness of Sunday’s game from his point of view, may depend to some extent on how Saturday goes for Brendan Rogers but the Republic of Ireland manager is adamant that the opportunity it will allow him to look at some of the squad’s more peripheral players means it won’t be a complete waste of time.

“There could be a great euphoria if Celtic can win the cup but I remember Jackie McNamara’s testimonial and it seemed a half-decent game,” he says.

“I know there’ll be a few changes during the course of the game and we’ll want to make some substitutions at half-time but the players should be able to get something out of it. You have to treat it as a sort of a friendly game but I’m hoping there’s going to be a bit of motivation on both sides to try and do something.”

O’Neill will take a squad of 18 to Celtic Park, a couple of whom are unlikely to play much more of a part in these three friendlies. Ciaran Clark, Darren Randolph and Keiren Westwood will play none at all in any of them with all three injured and already looking to sort out their respective fitness issues now in order to be ready for pre-season with their clubs.

There will be no caps on Sunday as it is not an official friendly but Preston forward Callum Robinson will get a little international taster while Graham Burke is, O’Neill says, set to play a part despite almost certainly starting for Shamrock Rovers at Sligo Rovers on Saturday evening.

The paperwork on Robinson’s passport is not yet done and so he remains ineligible to play in the games against France and the USA but O’Neill sounds keen to see if he and club-mate Sean Maguire can reproduce a little of the chemistry he feels the pair possess when playing together for Preston.

“I think the obvious thing is that we must use some games here to see if we can engineer a few goals and I think that at Preston – I mentioned the game against Sheff United when he played alongside Maguire – I thought they caused problems. I’m looking to see him go out and try to express himself, first of all, and if he can impress in the game then by the time his papers come through then at least he’s had some experience of the squad and he can try and push on from there, if that’s possible.”

Burke may have to get himself back to England if he hopes to establish himself in the squad over the long term but O’Neill fairly firmly rejected the notion that it is overdue recognition for either the 24 year-old or the Airtricity League in general.

“I don’t think you can level that at me,” he said. “There is that view, seemingly, that I only put the players in when they move abroad but I don’t do that. There is a fairly decent chance that if you are playing at the top echelon of the game you are probably going to impress a bit more. That’s the point.

“And Graham Burke was a kid when I went to Aston Villa but I actually think, Seamus McDonagh tells me, that in 2010, I might even have included him in a Sunday game which had a sprinkling of first team players in a pre-season friendly game [he did, it was against Basingstoke, and Burke scored after coming on late]. It’s not my fault that he’s back playing for Shamrock Rovers.”

Henrik Larsson will, it seems, be back playing for Celtic on Sunday which might well eclipse the presence of Ireland for many of the home supporters and it will be a rare return for O’Neill, a manager who won a treble himself in a highly successful five-year stint at the club.

“Stilyan Petrov had an emotional occasion when he came back there; I went and it was fine but I have never been back to Celtic to watch a competitive game. I have been asked up for a few and maybe when I retire I will get a season ticket at Celtic but I’m not one that wants to go back,” he said with a smile.

“The torch has passed. My time was great, but it’s gone.”