Jose Mourinho: ‘I still don’t understand the words of entertaining’ 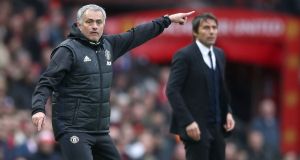 Jose Mourinho has won 12 of his 14 cup finals as a manager. Photograph: Nick Potts/PA Wire

Jose Mourinho insists the past is irrelevant as he prepares to face his former club Chelsea for the chance to lift the FA Cup, and promises an “entertaining” final, albeit on his own terms.

Romelu Lukaku may be fit for selection after an ankle injury and Mourinho confirmed Anthony Martial had returned to the matchday squad. But with 24 hours left of his season the Manchester United manager remains, as ever, focused on victory.

“Honestly I think what we did in the past has nothing to do with tomorrow,” said Mourinho, who has won 12 of his 14 cup finals as a manager. “I think the winning mentality has nothing to do with records or history in finals. The record doesn’t play. What plays is 11 v 11 tomorrow and everyone trying to give their best.”

Speaking from United’s base at the Grove Hotel in Hertfordshire, Mourinho was asked whether he anticipated an entertaining final against his old club. “I still don’t understand the words of entertaining,” came the reply.

Having claimed second place in the Premier League but endured a deflating Champions League campaign, going out in the last 16 at the hands of Sevilla, there have been mixed verdicts on United’s season to this point. A trophy would change perspective for many but Mourinho says his verdict will not be altered by one match.

“Of course it makes a difference if we win, but it is one thing to make a difference, the other to consider a season good or bad based on one match,” he said. “When I analyse my work, the effort I put in and everything we do in the club, and that includes the most important persons who are the players, I am not going to make an analysis based on one very important match. I know the players’ efforts, what they did. I know their positives and their negatives.”

As to the injured members of his first-team squad, Mourinho said: “Martial is fit and Lukaku we will have to wait till last moment. I don’t want to lie to you, to say he doesn’t play then he plays, or vice versa. With Lukaku we have to wait.” - Guardian service