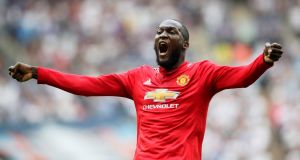 The fitness of Romelu Lukaku is José Mourinho’s sole matter of concern as the Manchester United manager prepares for the FA Cup final against Chelsea in unusually serene mood.

Lukaku will be given until “the last moment” to prove his fitness, according to his coach, after the striker missed the last three games of the league season with an ankle injury. Mourinho also confirmed David de Gea will start in goal ahead of Sergio Romero in a break from the policy that meant the Argentinian started in Cup competitions.

Mourinho will face off against his former club at Wembley after a season marked by vituperative exchanges between himself and his opposite number, Antonio Conte. But, speaking from United’s FA Cup base in the Hertfordshire countryside, the Portuguese noted only that he was “curious” about Conte’s future.

“Anthony Martial is fit and Lukaku – we will have to wait till the last moment,” Mourinho said of his injured players. “I don’t want to lie to you and say Lukaku doesn’t play, then he plays, or vice versa. We will have to wait on Lukaku.

“De Gea starts. It’s not about my trust or confidence in Sergio. Sergio was injured for a long, long time. He didn’t play some matches that normally would be his matches, like his semi-final against Tottenham. He trained really only one week before the Watford match and that’s the reason. Last season I played the Europa League final with Sergio and that was a much more important match than this one because it gave us the possibility to play Champions League.”

After finishing second behind Manchester City in the table, United have guaranteed Champions League football next season. While winning the FA Cup would undoubtedly add lustre to a season that has met with mixed reviews Mourinho says it will not alter his own verdict of what his players have achieved.

Chelsea come to Wembley in desperate need of a fillip after finishing outside the top four. Conte is almost certain to depart in the summer and it is perhaps this disparity between their positions that left Mourinho able to be diplomatic.

“I honestly still don’t know what Antonio’s situation is,” Mourinho said when asked if he had sympathy for his opposite number. “I didn’t read him saying that he was leaving, and for me that’s the most important thing. So I don’t know if it’s Antonio’s last match.

“Of course, sometimes I read that somebody is coming, Luis Enrique is coming, the other is coming, but until it is official that Antonio leaves I don’t know. I’m curious about it but whether tomorrow is his last match or not, it will not change his approach to the game and his desire to make it good.”

On the subject of Chelsea’s fans, Mourinho praised their support of him during his two periods at Stamford Bridge. Chants of “Judas” were directed at Mourinho at Stamford Bridge in last year’s FA Cup. But the 55-year-old insisted he had never had a bad word to say about Blues fans.

“You don’t have any quotes from me with negative words about Chelsea supporters, not one word‚” Mourinho said. “The only thing I say in relation to them is that since my first day in 2004 until my last day when I was sacked a couple of years ago, they were with me unconditionally. They supported me every day. They supported me every match. I will never forget it because they did what I think great supporters do, which is to support their manager unconditionally until the last day.”