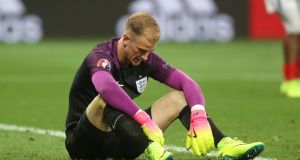 Jack Wilshere and Joe Hart have both spoken out to express their disappointment at being omitted from Gareth Southgate’s England squad for the World Cup.

Hart, who has 75 international caps, and Wilshere, who has 34, both failed to make the 23-man party announced on Wednesday – and were also absent from the standby list.

“Think its about time I had my say,” Wilshere posted on his personal Twitter account. “It goes without saying that I’m naturally incredibly disappointed to have been left out of the England squad for the World Cup.”

“I’ve felt fit, sharp and strong all season and believe I should be in the squad! And given the chance I could have made a real impact,” the Arsenal midfielder added.

“However, I have to respect the manager’s decision and would like to wish the whole squad all the very best for the tournament. I will always be an England fan and will be supporting the boys with the rest of the nation.”

Wilshere, who last played for England in the loss to Iceland at Euro 2016, at least saw the funny side when one tweeter invited him to Zante on holiday instead. “Let me know the dates and I’m in,” he replied.

Hart spoke out in an Instagram post on Friday morning. Underneath a picture of the England crest, he wrote: “Not going to lie, I’m gutted. After two years of trying to make the most of a really tough situation, this is hard to take.”

“I’m proud to have put in the graft and play every minute to qualify with the team and have a really important input in that outcome,” Hart added. The goalkeeper was picked for England’s first nine qualifiers, with Jack Butland starting against Lithuania after their place in Russia was assured.

“I know what I bring to the team, but it is what it is. Good luck to the team out there, the players know that even though I won’t be there, I will have my England shirt on as a fan this time and supporting all the way. No fear, go and smash it.”

Hart, who has struggled for form in loan spells at Torino and West Ham, missed out to Jordan Pickford, Jack Butland and Nick Pope – with Pope’s Burnley colleague Tom Heaton on the standby list.

Wilshere, who made just 12 Premier League starts with Arsenal this season, was overlooked for a central midfield berth with Southgate selecting Fabian Delph, Ruben Loftus-Cheek, Jordan Henderson and Eric Dier.

The England manager explained both decisions during his press conference on Thursday, and said that leaving out Hart was “a difficult call”.

“In Joe’s case, he’s been England No 1 with 75 caps. I don’t think it would be respectful to say to him, ‘would you go on standby?’” Southgate said.

“We either put him in the squad, or we think of what he’s done up to this point and hope that he resolves his club situation this summer and that he’s back contending for the No 1 shirt, not the No 3. That I think was the right thing to do.”

Southgate said that Wilshere “has of course been in our thoughts,” but he had opted to stick with players who appeared in pre-tournament friendlies – with the exception of Delph, “who had a fantastic season with the champions”.

“Jack had a good spell [THIS SEASON]but was maybe not as effective towards the end of the season,” Southgate added. “We’re very open minded in terms of what we want.”