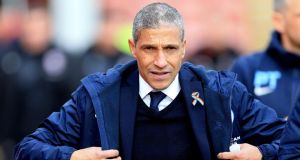 Chris Hughton’s Brighton take on Newcastle in a top of the table Championship clash on Tuesday. Photograph: Nigel French/PA

Chris Hughton would consider gaining promotion to the Premier League with Brighton & Hove Albion this season a more eye-catching achievement than the elevation to the top flight he oversaw at Newcastle United as he prepares to confront his former club at the Amex Stadium.

The two top sides in the Championship meet on Tuesday with each eager to open further distance from third-placed Huddersfield Town as they pursue automatic promotion. While Newcastle arrive on the south coast still infuriated to have dropped points against struggling Bristol City on Saturday, Brighton have emerged from a relatively stodgy period with successive wins and clean sheets, with the impressive win against Reading on Saturday having restored them to the top of the division.

The team have been beaten in the play-off semi-finals in three of the last four seasons but as they seek a first top-flight campaign in 34 years, they have proved admirably consistent under Hughton. They have lost only nine of their past 80 games in the second tier, stretching back to the end of 2014-15, with their progression constant. Indeed, they have accrued 100 points from their past 46 matches, the equivalent of an entire season, and can move four clear of Rafael Benítez’s much fancied team with victory on Tuesday, despite not having the same financial clout, or level of expectation, as their visitors.

Hughton retains fond memories of his time on Tyneside, where he was initially drafted in to work with United’s defence under Kevin Keegan in 2008 and, after a spell in caretaker charge, took the team back into the Premier League at the first time of asking two years later. “Newcastle was the highlight of my career as a manager,” he said. “You want to be part of winning teams, so that would have to be the highlight. It was my first managerial role, too, so it was very special for me and shaped my career.

“Whatever I was able to give the players, they gave me more. That club gave me an opportunity and I feel I’ve developed as a manager since. What we went through that [PROMOTION]season, and the next one [when Hughton was sacked in December] gave me a good grasp of what management was all about, the ups and downs. And I’d like to think I’m a better manager because of it. But the achievement here, I think, would be greater just for where we are as a football club. Newcastle are an established Premier League club with massive support, but this club has never been in the Premier League.

“We’ve established a good level of consistency and that is a credit to the players and their desire. Where we are, above Newcastle, is probably different to what most people would have expected. The expectations on them are different because of the club they are and the squad they have. They are strong and recruited well in summer.

“But I don’t want to take anything away from our players, or our aims and aspirations. I am surprised [to be above Newcastle], but we’ve got a team who have worked hard enough to have deserved it.”

Brighton made their own significant additions last summer, securing their top scorer Glenn Murray from Bournemouth – he made his move permanent for around £3m in January and has already contributed 16 league goals – and the centre-half Shane Duffy from Blackburn Rovers. The likes of Oliver Norwood and Sébastien Pocognoli, who should be fit after a slight groin problem, have also made impacts to supplement a side who have been shrewdly constructed and are now anxious to secure that elusive elevation.

Hughton’s team have conceded only nine at home all season, and Newcastle are still without their own leading scorer, the hamstrung Dwight Gayle.

“We learned about the small details from last season,” said their Spanish captain, Bruno, who led the Brighton side that missed out on automatic promotion on goal difference on the final afternoon last term despite accruing 89 points.

“We’re trying to look after them now. Every single goal we concede is a big thing. When we keep clean sheets you can see that everyone, not just the defenders, is happy. Clean sheets are one our biggest strengths and if we get one, we normally win the game.

“Last season was a tough time but we really learned a lot. The team came back stronger in pre-season. Some teams go down, some come back stronger and we are that type of team and those type of players. We are mentally strong. There are a lot of good things about this group. Quality is important, but the margins between teams are so small in this division. It’s easy to talk about spirit and togetherness but it is a big thing, especially when things don’t go as you want.

“We were on a bad run, not just in terms of results but also how we were playing, and yet we have come back even stronger. We’ve had our bad period. Now every win takes us a step closer to the Premier League. Winning this game would be a big step given the strength of the opponent in front of us.”