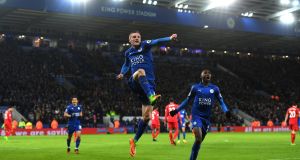 Jamie Vardy celebrates his second goal in Leicester’s 3-1 win over Liverpool, their first fixture since the sacking of Claudio Ranieri. Photograph: Michael Regan/Getty

It was just like shooting Bambi. That was the general consensus last week after Claudio Ranieri was mercilessly culled by Leicester City, his axing dividing humanity in to two very distinct camps.

There were those who believed his treatment by the club he had made champions a wet week before signalled a ruthless new low in the game, its soul incinerated. And there were those who asked ‘huh, what soul?’, suggesting that anyone who thought football was the sporting equivalent of People Before Profit up until last Thursday must have been asleep at the wheel. Any way, they argued, he’d lost the dressing room, and once that it is mislaid, you’re done for.

While conceding these latter points, Gary Neville and Jamie Carragher belonged firmly to the incinerated soul camp, Neville focussing his ire on the Leicester players while Carragher reckoned loot was the root of all evil.

“There are a couple of players who have spoken who I’d like to hear less from, to be honest,” said Gary, but he didn’t name names. We’re guessing, though, that one of them might be the son of a former team-mate of Gary’s who was a blonde Danish goalkeeper called Schmeichel. No, you’re not getting any more clues.

If the players conspired to have Claudio sacked that, said Gary, would be “despicable”, and you just knew if he was familiar with the word ‘sleveens’, he’d have used it.

Jamie, meanwhile, argued that Claudio’s biggest mistake was to win the league, the achievement giving Leicester notions when their current position in the table is probably a more accurate reflection of their worth. Arsene Wenger, he said, holds on to his job because he keeps getting his team in to the loot-a-rama of a competition that is the Champions League, the club’s owners unconcerned by the failure to win the Premier League title since around 1846 because they’re too busy counting said loot. “They’d probably give him a ten year contract tomorrow,” he said.

By now you weren’t feeling the footballing romance, at all.   And to add to Leicester’s woes, their first Claudio-less game was against a well-rested Liverpool who’d been recharging their batteries in La Manga during their 16 day break.

Leicester? “They’ve got sandbags in their legs at the moment, they’ve lost their confidence completely,” said Gary, so the game could only go one way.

Gary: “Liverpool were absolutely shocking. Two weeks’ break, what were they doing in La Manga?!”

Leicester’s performance, meanwhile, left the lads punch-drunk. “Claudio Ranieri will be thinking where was that two weeks ago? I don’t quite get how players can flick the switch like that, it’s difficult to explain,” said Gary. Jamie? “I’m lost for words.” So they took an ad break.

Second half. 3-0. “We. Are. Staying. Up,” sang the giddy home support, a bit of a come-down from ‘we’re gonna win the league’ from 12 months before, but life is a rollercoaster. Liverpool pulled one back, but Claudio-less Leicester triumphed.

“What would Ranieri have made of that,” asked David Jones.

“The same as me,” said Jamie, in an eye-rolling kind of way.

Then, the line that made the subscription worth paying:

“I don’t think I have ever seen a game of football where two teams should come off the pitch and both hang their heads in shame - Liverpool for how bad they were, and Leicester for how good they were.”

Jamie and Gary might not have been Franco Baresi’s love children, but the pair of them shared a trait: they’d have sold their Grannies on eBay in return for a successful 50-50 tackle. And they’d have run themselves in to the ground in pursuit of such exhilaration. So, they were at a loss to understand why the high-octane Leicester of last season finally turned up on this February night, a handful of days after Claudio was asked to empty his desk.

“It’s not about tactics, it’s about having something inside you,” said Gary.

Then Jamie turned his attention to Jurgen Klopp and he tried to be nice, while pointing out a whole heap of tactical cluelessness. If Liverpool want to make a change soon, we know a gaffer who’s free. He won the league last year, so the pedigree’s good.