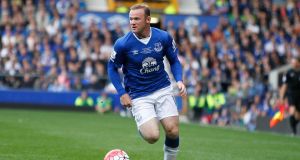 Everton manager Ronald Koeman has opened the door for Wayne Rooney to return to Goodison Park.

Manchester United’s record goalscorer has been linked with a move back to his boyhood club, having struggled to hold down a regular place under Jose Mourinho.

Rooney’s agent was in China this month, seemingly to sound out interest in his client, but the 31-year-old player last week issued a statement insisting he was staying at Old Trafford.

However, his long-term future remains in doubt, and Koeman is ready to make a move in the summer to bring Rooney back to where it all began.

“I believe that Wayne Rooney is still playing at a high level,” the Dutchman told Sky Sports.

“I think he made a good choice to stay at Manchester United and in the Premier League because he has still two or three years in front of him to play on a high level.

“What will happen at the end of the season? I don’t know but in my opinion he is one of the players who can make Everton more stronger.

“It’s all about what the player likes, what Manchester United needs to do, and we are not involved in that project.

“But every player that we at Everton think can make the team stronger is welcome to Everton.”

Rooney progressed through the ranks in the Toffees’ academy, having joined at the age of nine, and his rise accelerated in his mid-teens as he moved from the youth side to become a first-team regular.

He made his debut aged 16 on the opening day of the 2002/03 campaign against Tottenham and six weeks later became Everton’s youngest scorer with two goals against Wrexham in the League Cup. He scored his first Premier League goal a fortnight later — a last-minute winner against Arsenal five days before his 17th birthday.

Everton were unable to hang on to Rooney when United came calling in the summer of 2004 but there is now a realistic prospect of him making the move back to Merseyside.

Koeman’s comments were backed up by director of football Steve Walsh, who said it would be remiss of the club not to be interested if Rooney was available.

“Wayne Rooney is one of the greatest players that has ever played the game in England and for us not to be interested would be wrong,” he said.

“He started his career here and if the opportunity arose that he could come back and it sat well with everyone it is something we would consider.

“He is a class apart, he sees things, and all the things that have been said about Wayne are true. He comes into that category of being one of England’s greatest ever players, so why wouldn’t we be interested?

“I think the whole thing would be euphoric. I think we could sell a lot of shirts, that’s for sure.

“But let’s not get ahead of ourselves. Wayne is contracted to Manchester United and made a decision to continue to play for them.

“Let’s wait and see what happens in the future.”