All in the Game: Farewell Claudio, the sausageman

Also, Arsene Wenger and his unsavoury company, Merson at it again and more 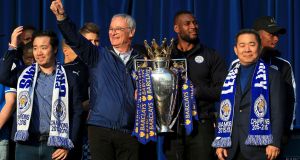 After Claudio Ranieri’s sacking the consensus was that there’s no loyalty in football any more – to which more a few not unreasonably asked: ‘You’re only noticing that now?’

Initially, though, it looked like Sean Jeynes was a flickering light in this ruthless murky world, the Leicester butcher defiantly declaring that he would continue to sell the Ranieri sausage he created last year in honour of the man himself. And so honoured was Claudio, he proclaimed: “I am the sausageman!”

“The legend will live on in our eyes,” said Sean, and that warmed many a heart.

But? “It’s sad, but at the end it’s a result business and results have been poor. They needed a change …. sometimes a change can spark them into life.”

And worse: he’s now working on a new sausage. “A [Roberto] Mancini one maybe – I think that’ll be a good move and, let’s face it, he’s Italian so I’m sure we can adapt it somehow.”

Spare a thought for Arsene Wenger. Ah, do. On Monday night he quite probably felt enormously relieved after his lads saw off Sutton United in the FA Cup, when the mother of all upsets would have put the tin hat on his current woes.

And when he got home he might well have poured himself a tipple and settled down to watch the late night news. And he’d have seen coverage of the protest in London against the upcoming state visit of Donald Trump. But if he’d looked hard enough, he’d have spotted a sign in the middle of the throng, beside all the ‘Dump Trump’ offerings. Yes, it read ‘Wenger Out’.

As the London Metro so cruelly put it, “people took to the streets to vent their anger at a power-hungry, out-of-touch egomaniacal leader who doesn’t look fit for the scale of his job ….. there were also mass protests against Donald Trump.”

“Yesterday my dream died …. to the supporters, you took me into your hearts from day one and loved me. I love you too. No one can ever take away what we together have achieved, and I hope you think about it and smile every day the way I always will.” Claudio Ranieri’s statement should have been sponsored by Kleenex, it had us in floods.

“For me there have been a few strange decisions in 16/17: Brexit, Trump, Ranieri. Do I have to understand it all the time? Obviously not.” Jurgen Klopp, mystified by the world he lives in – in a very bigly way.

“UNGRATEFUL ENGLISH …… Leicester, the club who with Ranieri became a prince courted by the world’s media, return to being a normal frog.” Gazzetta dello Sport, hopping mad.

“Sooner or later, everyone gets what they deserve.” It’s almost eight years since Claudio Ranieri dropped goalkeeper Doni at Roma, but judging by the Brazilian’s reaction to news of his Leicester sacking, he has the memory of an elephant.

“If you take away the top seven, they’re top.” Paul Merson noting that if it wasn’t for Chelsea, Man City, Spurs, Arsenal, Liverpool, Man Utd and Everton, eighth placed West Brom would be champions-elect.

298: That’s how many days Claudio Ranieri held on to his Leicester job after wining the Premier League. Funny old game.

You might have spotted some eyebrow-wiggling last week when it was announced that Alexei Smertin had been appointed Russia’s ‘anti-racism inspector’ ahead of the 2018 World Cup, the former international tasked with investigating incidents of racism in football in his homeland.

The scepticism about his suitability for the role largely dates back to comments he made to the BBC in 2015 when he insisted that “there’s no racism in Russia, because it does not exist” – at a time when black players in the country were reporting unrelenting abuse from the terraces.

“It is something against the opposition, not against a person,” said Smertin. “Ten years ago, some fans may have given a banana to black guys – it was just for fun.”

Russian Deputy Prime Minister Vitaly Mutko insisted, though, that Smertin is “the perfect candidate for the role”, so that was reassuring, nothing to worry about.

(That’s the same Vitaly Mutko who, as Sports Minister, declared that Russian fans weren’t actually abusing a black Czech Republic player at Euro 2012, they were just annoyed with the Czech fans for not joining in on a Mexican Wave. “The Czech sector didn’t stand up so they started condemning them with the appropriate noises,” he said. Monkey noises, that is. Really.).

“I have already found the solution – we are going to cut his tongue out. To play football, you don’t need a tongue, so we are going to cut it out.” After his client Mario Balotelli was sent off for dissent, agent Mino Raiola comes up with an idea that might just ensure it doesn’t happen again.

“It was like ice hockey.” Monaco vice-president Vadim Vasilyev on that 5-3 Champions League ding-dong with Manchester City.

“As soon as he went from 99 kilos down to 94.5, he scored. He should be angry with himself: he has thrown away a year, the ****ing dog.” While saluting Maxi Lopez for scoring in the 4-1 defeat to Roma, Torino coach Sinisa Mihajlovic suggests if he’d watched his waistline, goals wouldn’t have been such a rare occurrence this season.

“When I pass away, I don’t want any silence or clapping – just a minute’s booing at clubs that hated me.” Cardiff City gaffer Neil Warnock acknowledging that he’s not exactly widely loved.

So, what’s Paul Merson gone and said now? Well, to briefly recap, you’ll recall that he nigh on spontaneously combusted last month when Hull City appointed Marco Silva as Mike Phelan’s replacement, his chief concerns being that (a) he’d never heard of the man and (b) he’s a foreigner.

“I’ve got nothing against foreign managers, but . . . what’s he know about the Premier League? What’s he know?! I’m not having it! There’s enough British managers out there . . . off the top of my head, why not Thierry Henry? He’s done his badges, he’s a legend in the game, he’s ripped up the Premier League. If he walked into Hull City he’d give them a lift.”

Fast forward to the weekend just passed. There is, you might have heard, a vacancy at Leicester. Who does Merse think should get the job.

“He’s made such a difference in the last three months, it is phenomenal. So why don’t they say ‘right, if he can make that much of a difference at Leicester in the next three months’”. Yes, he reckons Leicester should go for Marco Silva. He said it with a straight face, too.

After spending over €150 million on Brazilians Oscar, Hulk and Elkeson, with their combined weekly wages around the €1 million mark, Chinese club Shanghai SIPG might be hoping for a decent return this season under manager Andres Villas-Boas.

Has he guaranteed them silverware? He has indeed.

“I’ve promised the president that at the end of the season he would sleep with one trophy . . . I hope that me and the players can give him this special night.”

If Chen Xuyuan’s bed remains empty, you fear Villas Boas will go the same way as his predecessor in the job, Sven-Goran Eriksson: out the door.