For many years, Zlatan and English football regarded each other with mutual scorn 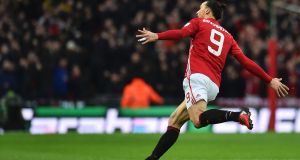 Three weeks ago at Goodison Park, Ross Barkley went around the Bournemouth keeper Artur Boruc, and raised his arms to celebrate before he had completed the task of passing the ball into the net. Maybe Barkley was guilty of a touch of hubris, but sometimes you just know.

Three minutes from the end of the League Cup final at Wembley, Ander Herrera clipped a cross in from the right, and the tens of thousands of Manchester United fans suddenly understood how Barkley had felt.

Zlatan Ibrahimovic was waiting in the middle unmarked, and in that instant it was immediately plain that the ball was going to reach him, and that he was going to score. And so the United fans were already celebrating before he had even headed the ball. They just knew.

On the pitch afterwards Zlatan took the opportunity to stick it to the critics, as is tradition. “People said I couldn’t do it. I just keep doing it,” he said.

Zlatan’s antennae must be exquisitely attuned to criticism because it is difficult to recall too much of it when he agreed to join Manchester United, fresh off a 50-goal season at Paris Saint-Germain.

As far as they were concerned in England, Zlatan was an overrated flair player whose occasional spectacular goals only served to underline his essential unreliability and flakiness. And when you consider the evidence of the first part of his career, this impression was fair.

He scored 20 club goals in a season just once in the first nine seasons of his career, at Malmo, Ajax, Juventus and Inter. The big influence on Zlatan during this period was Fabio Capello, his coach at Juventus. Zlatan had arrived at the club from Ajax, where he had rowed with the technical director, Louis van Gaal.

He was receptive to Capello’s message, which was to forget all the Dutch total football nonsense he had been force-fed at Ajax. Capello told Zlatan he didn’t want to see him participating in the build-up. He wanted him to be a penalty area killer.

The metamorphosis began at Juventus but it was only completed a couple of seasons later, by which time Ibrahimovic was playing for Roberto Mancini at Inter. He turned 26 in the 2007-08 season, and scored 22 goals. It was only the second time in his career that he had scored more than 20 club goals in a season.

This marked the point at which he became a new player – 311 of his 418 club goals were scored in the 10 seasons since. He went from being an entertainer who scored a goal every three games, to a tyrant who scored three goals in every four. It took years for the image he had already established to catch up to reality, but by the time he joined an English club, the process was more or less complete.

Even still, it was quite reasonable to doubt whether he could, at this late stage of his career, adapt to the physical demands of English football, with its higher tempo and intensity. Even when he was in his late 20s, he was telling Pep Guardiola that “I can’t run up and down the pitch all day. I weigh 98 kilos, I’m not built for that.” At 35, would he still have the mobility to affect games on a regular basis?

In the end Zlatan made the difference between victory and defeat. Jose Mourinho had been tactically outthought by Claude Puel. 2-1 up at half-time, Mourinho had replaced Juan Mata with Michael Carrick in order to wrest back control of the midfield, only to see his team concede an immediate equaliser. Southampton dominated midfield throughout, and created a series of good chances with pinpoint deliveries into the box, especially from James Ward-Prowse.

They looked like a team with a plan; United, by contrast, lacked conviction. After an hour of the game, with the favourites having surrendered a two goal lead, Southampton looked more likely to win. Mourinho seemed unsure what to do, repeatedly summoning Wayne Rooney to dispense tactical instructions, only to decide not to bring him on after all.

But of all the many differences between Puel and Mourinho, one of the most important is that Puel couldn’t pick up the phone in the summer and talk Zlatan into joining his club. Like a film director who is in demand because studios know the big stars want to work with him, Mourinho was able to bring Zlatan to Old Trafford, and wherever this team ultimately finishes in the Premier League, United fans will always be grateful for that.