Jamie Vardy and Leicester rediscover swagger as Liverpool stagger on 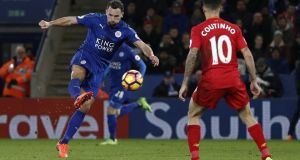 It was a surreal evening and hard to know where to start other than to say that the Leicester City players clearly felt they had a point to prove. Debate will rage long into the night about what this exhilarating Leicester performance says about their players and the club’s decision to sack Claudio Ranieri, yet the only thing that matters for the owners is that the Premier League champions are back.

Vichai Srivaddhanaprabha, the chairman, and Aiyawatt, his son, will feel a sense of vindication about the controversial call they made to dismiss Ranieri after Leicester, inspired by Jamie Vardy, recorded their first Premier League win of the year in style to climb up to 15th place in the table.

Leicester were unrecognisable from the side that had been sleepwalking towards the Championship and much more like the all-encompassing team of last season. Vardy scored twice – his first Premier League goals since December – and Danny Drinkwater, another of the stars of the title-winning campaign, chose an opportune time to register his first of the season with a beautiful shot from outside the area.

One of the abiding images of the evening, however, came on 65 minutes, when Ranieri’s name was sung with gusto. Lighting up the stadium with their mobile phones, the home supporters stood to applaud the manager who was gone but not forgotten. Moments later Philippe Coutinho pulled a goal back for Jürgen Klopp’s side but this was never going to be Liverpool’s night.

It was always going to be fascinating to see how the Leicester players reacted to what has been a tumultuous few days since that news broke on Thursday night that Ranieri was out of a job. Craig Shakespeare expressed his hope that all the criticism would “put a bit more fire in the belly” of his players and it soon became clear that Ranieri’s former assistant would get his wish – and more.

Playing at a high tempo, pressing aggressively and attacking with pace and belief, Leicester got off to an electric start. Liverpool, who were playing their first game for 16 days, were simply unable to cope, with Klopp’s players blown away as Leicester tore into them. The only surprise was that we had to wait until the 28th minute for the opening goal. By half-time, however, Leicester had doubled their lead, Shakespeare was being asked to wave to the home supporters and the club’s owners had big smiles on their face in the directors’ box.

From Leicester’s point of view, it was a stunning first 45 minutes that raises all sorts of questions. Whatever the rights and wrongs of what happened last week, they were outstanding during that opening period and it seemed extraordinary to think that we were watching the same club that had lost their previous five league matches and come into this game without having scored a top-flight goal this year.

That statistic was put to bed when Vardy registered the first. Marc Albrighton delivered the perfectly-weighted pass that exposed Lucas Leiva, who endured a torrid night standing in for the injured Dejan Lovren at centre back, and Vardy did the rest with the minimum of fuss, coolly dispatching a low shot inside Liverpool keeper Simon Mignolet’s near post. The celebration that followed was full of raw emotion as Vardy punched the corner flag.

The goal, Leicester’s first in the league for 638 minutes, had been coming. Shinji Okazaki, restored to the starting line-up, came close in the sixth minute with a header that Mignolet turned around the post. Robert Huth wastefully headed Albrighton’s corner over the bar and Vardy, after a brilliant first touch that took him around Lucas, should have scored with a left-footed volley from eight yards that the Liverpool goalkeeper managed to claw away.

It was breathless stuff and had turned into a chastening experience for the visitors, who enjoyed more possession but threatened only sporadically, with Kasper Schmeichel smothering Coutinho’s shot and turning another effort, from Emre Can on the stroke of half-time, around the upright.

By that stage, though, Leicester had a second and it was a terrific goal. James Milner’s header from Albrighton’s floated centre dropped invitingly for Drinkwater about 25 yards from goal, yet there was still so much to admire about the way that the midfielder expertly speared a controlled volley into the far corner of the net.

Liverpool, perhaps not surprisingly, were out on the pitch early after the restart. Their preparations for the game had not been helped by the news that Jordan Henderson had been ruled out after picking up a knee injury in training, yet it was beginning to feel like the worst news of all for Liverpool was that Ranieri had been sacked.

Christian Fuchs, with a neat turn on the left, created a yard of space to dig out a right-footed cross that Vardy, who was afforded far too much space in the Liverpool area, met with a superb glancing header.

Coutinho, picked out by Can, beat Schmeichel with a nice finish from 18 yards on 68 minutes but Leicester had no intention of surrendering after all their hard work.