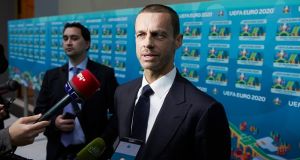 There were probably some cornflakes spluttered across Fifa breakfast tables as the game’s top ranked blazers read the New York Times interview on Monday in which new Uefa president Aleksander Ceferin suggested that the United States would be less likely to get the 2026 World Cup if the travel restrictions championed by President Trump become a long term feature.

It would, of course, be nice to think that Ceferin, whose jobs makes him a Fifa vice-president now too, might help pressure the sport’s governing body to raise its standards after having awarded the next two World Cups to Russia and Qatar respectively. But from a practical point of view Gianni Infantino and co. will know that they are not in much of a position to alienate the US just now.

For quite some time now Fifa has been digging a hole for itself in relation to its most prestigious cup and productive cash cow. Making critical decisions regarding its future in the immediate aftermath of an election dominated by the fallout of a huge financial scandal was never likely to go well but it is still somewhat shocking to see the extent to which the current regime is compounding the mistakes made by the last.

Future ones will, it seems, simply have to live with the consequences.

Qatar is a disaster on a number of fronts for Fifa and one closely associated to the corruption that seems to have been almost endemic at the top end of the organisation under Sepp Blatter. But the campaign promise by his successor to enlarge the tournament has further limited the organisation’s options when it comes to potential hosts, something that makes another Qatar more rather than less likely.

If all competition to stage World Cups evaporated, as actually seems close to happening with the Olympics, it might have its positives with would-be hosts potentially able to negotiate more reasonable deals for themselves. In that scenario, they would at least limit the scale of the sorts of financial calamities visited upon South Africa and Brazil by football’s, and their own, leaderships. As things stand, however, that looks unlikely.

The need to shift the 2022 tournament to winter, meanwhile, has greatly strengthened the hand of the European Clubs Association which trebled its share of the tournament’s revenues when its members had to be bought off and also secured a major say in the game’s future international calendar.

That has consequences for 2026 with Infantino rewarding those who voted for him by pushing through the expanded tournament while being obliged by the need to placate the clubs by keeping the competition to the same number of days (32) during which the finalists will play the same number of games (seven).

Thus, we get an event that will include almost a quarter of the member countries kicking off with 16 three team groups, many of which are bound to conclude with games in which specific results will safely see both sides through to the knockout stages.

The extra places will at least allow for a rebalancing of the representation at the event although either introducing an element of sporting merit so as to reward progress in Africa and Asia or even moving to 40 countries would have a better way to do that. As it is, Uefa seems to believe that an increase to 16 teams, from its current 13, is as much as it can hope for despite the fact that Fifa’s own rankings currently suggesting that 25 of the game’s top 48 national sides play in Europe.

Giving it half the tournament would clearly be unacceptable but then Asia getting nine would not make an awful lot of sense if it were not for the fact that China might make it to a lot more World Cups; a seventh North American side will not bring quite so much to the party while even six places for the much stronger but generally hard done by South Americans will almost certainly mean their qualifying system - perhaps the best in the world - effectively having to be ripped up so as to cover up how meaningless it has all become.

The ECA, partly for some these reasons, made plain its opposition to the expansion, and threw in the odd veiled threat but settled down once it saw for proposed format. Its primary concern, after all, is the well being of its members’ players who, it had been feared, might be overly tired when the real business of the International Champions Cup (17 teams, four continents, three league tables, no overall winner), or whatever is bringing in the cheques and cultivating the next generation of consumers nine years from now, begins in mid July.

The upside of the expansion is, needless to say, greater projected revenues with Fifa reckoning that it can squeeze an extra billion dollars out of the event, two thirds of which will be profit, although this does not take any account of what the clubs are likely to demand when their current deal (worth just about €200 million a tournament to them) runs out post Qatar.

For the hosts, meanwhile, there is the issue of having 16 more teams and their fans about the place as well as, even if the extra games are to be packed into the same number of stadiums, 16 more base camps.

And so 2026 is particularly important to Fifa for there will be both financial and logistical challenges to be overcome and North America looks comfortably their best bet to cope without the sort of accompanying controversy that the organisation is hoping to avoid for the first time since the Germany were hosts in 2006 .

There are other prospective bidders but Colombia (and potential prospective partners), say, has a touch of the Brazils about it; Azerbaijan, the Qatars and so it is far from out of the question that the tournament could end up back in the home of a European “big five” league if the Americans don’t come through.

To give them options for 2026 and, he will hope, and Fifa a few beyond that, Infantino made it clear earlier this month that, despite Fifa having previously banned joint bids after the experience of 2002, he is open to clusters of countries getting together to stage the tournament and a joint bid between the United States, Mexico and Canada is regarded as a strong possibility.

The bid, though, would have to be put together by the end of next year (the winner will be chosen in May 2020) something that will not be made easier by the current state of relations between Mexico and the US.

Either way, the Americans are likely to sign up to Fifa’s usual rules on the easing of visa restrictions for the duration of the tournament. That, like rewriting of tax laws so as to maximise the organisation’s profit, are, as we have seen time and again, Fifa’s real priorities.

Ceferin, it seems, is still only learning how things really work at the game’s top table.