Hamburg haunted yet again at Bayern Munich’s house of horrors 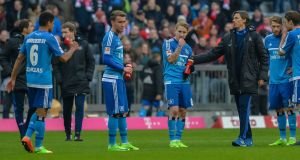 “This is something that can’t be allowed to happen, but it has happened.” Just when life starts to look good again, along come Bayern Munich. Or more specifically in Hamburg’s case, a trip to Munich to face them in the Allianz Arena. Among a squad of shell-shocked players, few seemed quite as humbled as the captain, Gotoku Sakai, after Saturday’s 8-0 drubbing by Bayern.

In terms of even recent historical perspective, it was hardly a coupon-buster. Starting from 2010, Hamburg’s reverses on their visits to Bayern have been by the scores of 6-0, 5-0, 9-2, 3-1, 8-0, 5-0. When they lost 8-0 here the last time, in early 2015, it was the biggest defeat Der Dino had suffered during an ever-present stay in the Bundesliga. This Saturday, it barely seemed worth an arch of Carlo Ancelotti’s famously active left eyebrow.

It was as calm a 1,000th career match on the bench as the Italian could have hoped for, with the pre-match presentation of a bouquet of flowers and an enormous over-sized bread pretzel to the mildly-bemused Ancelotti more awkward than anything his players would face on the field. “In the Bundesliga you really have to fight for every goal,” the hat-trick hero Robert Lewandowski remarked after the match, “but today it was easy.” Rarely do players – even Bayern players – employ such a brutal level of honesty.

Hamburg may have been here before but boy, did this one hurt. This latest instalment of punishment from Bayern was, in the words of the goalkeeper Rene Adler, “simply unbearable”. Following a shambolic start to the season, with five straight defeats, it had felt like the club was beginning to turn a corner, with Jens Todt replacing the much-maligned Dietmar Beiersdorfer as sporting director at the start of the year and Hamburg entering this match on a sequence of four unbeaten matches, which included progress to the last eight of the DfB Pokal.

Defeat here was expected. A collapse of this magnitude, however, has made everyone wonder if this new house was just built on sand. Coach Markus Gisdol’s touchline demeanour was taken as representative of his team’s efforts in some quarters – standing, cajoling in the technical area for the first quarter of an hour, and then sat down for the rest of the encounter.

On Sunday morning, Hamburger Morgenpost shook its head in disbelief that “this was the HSV that won 3-0 in Leipzig two weeks ago”. That’s not entirely true; Kyriakos Papadopoulos, who has been an inspiration since arriving on loan from Bayer Leverkusen and scored the opener in that match, was nursing a shoulder complaint here, and Johan Djourou wasn’t much of a replacement, in truth. The wisdom of leaning so heavily on a player who has suffered such a litany of injuries in recent years is open to question but regardless, Papadopoulos’s return in the next few matches will be vital, with this defeat returning HSV to the relegation play-off spot of third bottom.

Gisdol had talked before the game of his desire to “get stuck in”, but there was little evidence of that. In his, and the squad’s, defence a flu bug had swept through the camp in the second half of last week, with Albin Ekdal, Aaron Hunt (who both started on the bench) and Michael Gregoritsch among those affected. A lack of energy could only partially explain just how bad this was; mostly, it all tallied with the sense of HSV holding something back, with the joint top scorer Bobby Wood left on the bench for the duration, after Gisdol warned “we have to be careful with him” before the match.

The real challenges start now, with three successive home games – the DfB Pokal quarter-final against Borussia Mönchengladbach on Wednesday is followed by a league meeting with the same opponents, with the visit of Hertha Berlin sandwiched between them. Gisdol and his players will lock themselves away before then in an attempt to foster some sort of siege mentality, with no open training sessions before the midweek game.

The concern, after Saturday, is that the old habits and mentalities are too deeply ingrained. After the penalty with which Lewandowski made it 2-0, HSV have now given away seven spot-kicks, a league high – and each one has been conceded by a different player. The malaise has run deep this season, and it will need a real shift in terms of collective responsibility to avoid a season’s end as ruinous as its start.

1 Andy Farrell hands Billy Burns first Ireland start against Georgia
2 ‘God is dead’: The world’s front pages remember Diego Maradona
3 Keith Duggan: Through the glories and the disgraces, we were all Maradona addicts
4 GAA Statistics: Can Cavan and Thomas Galligan beat Dublin with the long kickout?
5 Rugby Stats: Blame game at lineout time is on the whole team
Real news has value SUBSCRIBE
Crossword Get access to over 6,000 interactive crosswords