Chief executive sends message to Government on the realities of situation 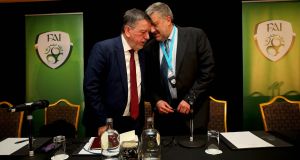 The FAI has said it is hopeful of securing the €18 million in funding it needs in order to implement its survival plan but after its reconvened agm at Citywest in Dublin, acting chief executive Paul Cooke, seemed unable to confirm that it even has the funds to pay its wage bill at the end of January.

“I think it [the association] can can stay in one piece, the [business] plan is robust but we need every stakeholder to engage here because we are in dangerous territory,” he said. “I mentioned liquidation earlier and we are heading damn close to the red zone.”

Asked specifically if there is the money to pay staff next month, Cooke said that: “At the moment we are in discussions. But if we ever go into a position where we can’t see the future, the directors have a decision to make.”

In the meantime, he seemed to be sending a message to Government regarding the urgency of the situation.

Cooke said that the association’s directors have been told that as long as negotiations with the association’s banks, the Government and Uefa regarding a rescue are ongoing then they cannot be accused of reckless trading. But, he observed “if those negotiations were to break down, the solvency process is something that could happen. That could be examinership, it could be even liquidation”.

Liquidation, he suggested, is “the nuclear option”.

Despite the talk of worst-case scenarios, there was clearly the belief the Government will ultimately come on board with the other stakeholders and provide the support the association says that it needs.

Senior Uefa officials are to visit Dublin to discuss the situation with Government on January 14th but the FAI wants to broaden those talks out into “a round table” and after an unpublicised meeting between the board members and Minister Shane Ross on December 20th that is said to have gone well, (much better, at least, than the widely reported one four days earlier).

There is the definite sense that an agreement can be reached especially in the light of encouraging public comments from both Ross and Taoiseach Leo Varadkar.

Departing association president Donal Conway, who has not been attending the meeting with the Minister, sought to see things from the Government’s perspective.

He had no complaints, he said. “The reality is we brought all these problems to our own door.”

By the end of the day, the association had issued a short apology to all of its “stakeholders” for “the mistakes of the past” part of an effort, it was suggested, at starting to move forward.

Certainly this session of its 2019 agm was, like the first one back in July, an altogether different affair to the John Delaney-dominated gatherings of the previous decade and a half.

After the endlessly upbeat assessments of the financial outlook back then, the tone here was obviously gloomy but the delegates had found their voice, to such an extent in fact that one described it as “brilliant” that so many questions were being asked.

Quite a few were directed at the association’s auditors, Deloitte, who made it clear that they would not be seeking to stay on in the role. Their representative, Richard Howard, might be forgiven for preferring the meetings where Delaney’s presence ensured an absence of dissenting voices.

Here, Howard was most productively quizzed by Dublin solicitor Brendan Dillon, himself a former board member of the association who continues to be involved in the university sector, regarding the performance of the firm, particularly in relation to the standards generally expected with regard to audits of charitable or voluntary organisations.

A delegate suggested that he had just thrown the old board under a bus but none of the members of the one he was referring to – several of whom were back as ordinary delegates – made any attempt to defend themselves.

Dillon said that when he had resigned from the board 15 years ago he had written to it to express concerns in relation to some of the very issues that subsequently reached such catastrophic proportions under Delaney. He had, he said, copied the letter to Deloitte.

Ultimately, when Dillon pressed Howard on what checks the firm had applied to ensure that expenses were properly documented, Howard declined to answer.

It was far from the sort of reassurance that you would expect from a firm that earned more than €500,000 from the association for its work on the accounts for 2017 and 2018 alone. There were repeated hints, indeed, from the top table over the course of the day that action against the firm is one of the options being considered.

An early warning regarding Delaney’s expenses, €600,000 of which has had to be reclassified as remuneration, would have had the potential to save the organisation a good chunk of the €2.7 million tax settlement it has offered to the Revenue.

Revenue are apparently still weighing up whether to settle for that sum and, Cooke observed, “anything” could happen on that front. Here’s hoping that, whatever amount they agree on in the end, they are okay with a Department of Sport cheque.

1 Rory McIlroy puts integrity ahead of glory in US PGA second round
2 Lionel Messi waves his magic wand again to guide Barça past Napoli
3 Bayern Munich complete formalities with rout over Chelsea
4 From Maestro to Mister: Andrea Pirlo named new Juventus boss
5 Andy Farrell admits Ireland net may need to be spread wide in the autumn
Real news has value SUBSCRIBE
Crossword Get access to over 6,000 interactive crosswords